A look ahead to Saturday’s Sky Bet Championship game

Huddersfield Town return to action after the November international break when they travel to Stoke City at the bet365 Stadium on Saturday 21 November 2020; 3pm kick-off

Carlos Corberán’s side will be looking to get off to a winning start as the fixtures come thick and fast – there’s 12 between the Stoke game and Town’s fixture on 2 January 2020!

In their last outing away from home, the Terriers beat Millwall 3-0 in what was an impressive team performance! They also drew 1-1 with Luton Town prior to the international break.

It’s the first back-to-back away games for Town who face Wycombe Wanderers on Tuesday evening.

Stoke City have excelled under the management of Michael O’Neill (below) and currently sit just outside the Play-Off places with 18 points from 11 games. 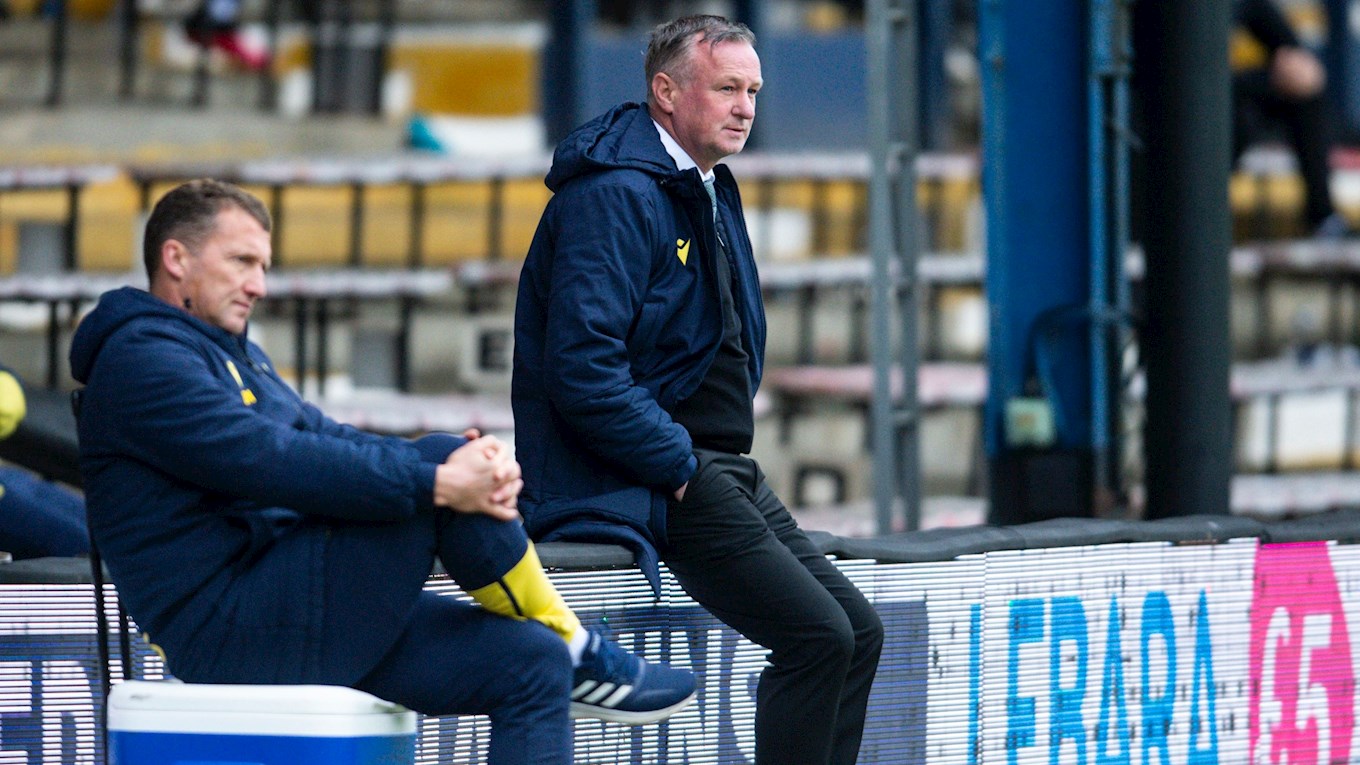 The former Northern Ireland Manager was appointed in November 2019 and helped guide the Potters away from the relegation zone.

They brought their good form from the end of the 2019/20 campaign – winning four of their last six games - into the new one.

They were only beaten once in their opening seven games of the campaign beating the likes of Brentford, Luton and Preston during that time.

The Potters have only been beaten once at the bet365 Stadium so far this season – winning two and drawing two. That defeat came in their first home game of the campaign as they were beaten 2-0 by Bristol City.

O’Neill bolstered his squad by bringing in experience through James Chester, John Obi Mikel and Steven Fletcher. Alongside younger players like Jacob Brown.

As mentioned earlier, the Terriers will be looking to get back to winning ways after their draw with Luton prior to the break.

On the road, however, Town have won two, drawn one and lost two. The last win coming against Millwall.

As for the hosts, they’ll be looking to continue their good run of form. They beat table toppers Reading 3-0 away from home!

They have the 12th best home form in the Sky Bet Championship, picking up eight points from five games at the bet365 Stadium.

The right-back is no stranger to Huddersfield Town fans after making 200 appearances for the Club. Tommy joined Town from Manchester City before progressing through the Terriers’ Academy into the First Team.

Tommy went from strength-to-strength at Town and helped the Club win promotion to the Premier League, leading the Terriers out at Wembley. He was then appointed Town’s Club Captain for the years in the top-flight.

He joined Stoke City in July 2019 and has been virtually ever present under Michael O’Neill. The attack minded defender has one goal and one assist to his name this season. 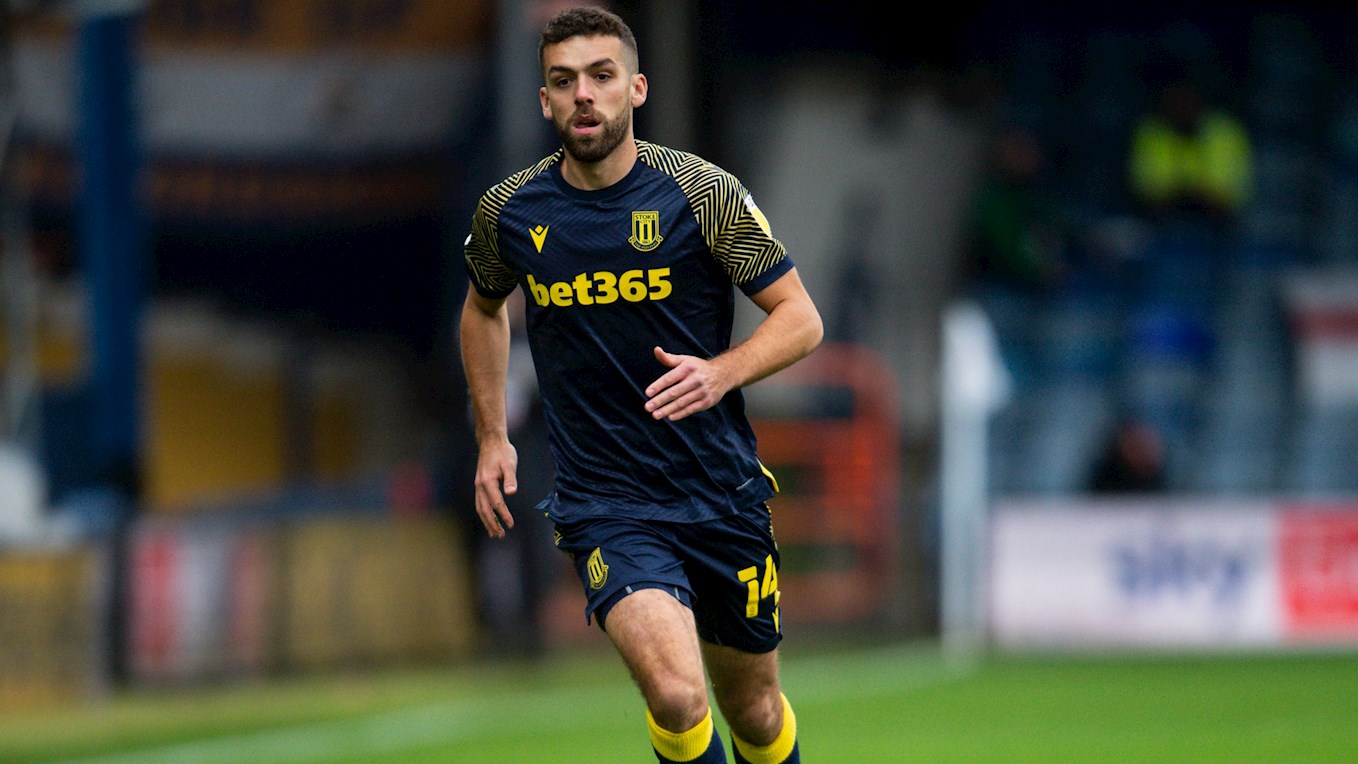 Like Tommy, Tyrese progressed through Manchester City’s Academy before joining the Potters.

The striker, who can also play out-wide, made his professional debut on 24 February 2018 in a 1–1 draw at Leicester City in the Premier League. It was during the 2019/20 season, where he became a regular for Stoke City.

The 20-year-old has scored three goals this season, including a brace against Brentford, and set five goals up for his teammates. 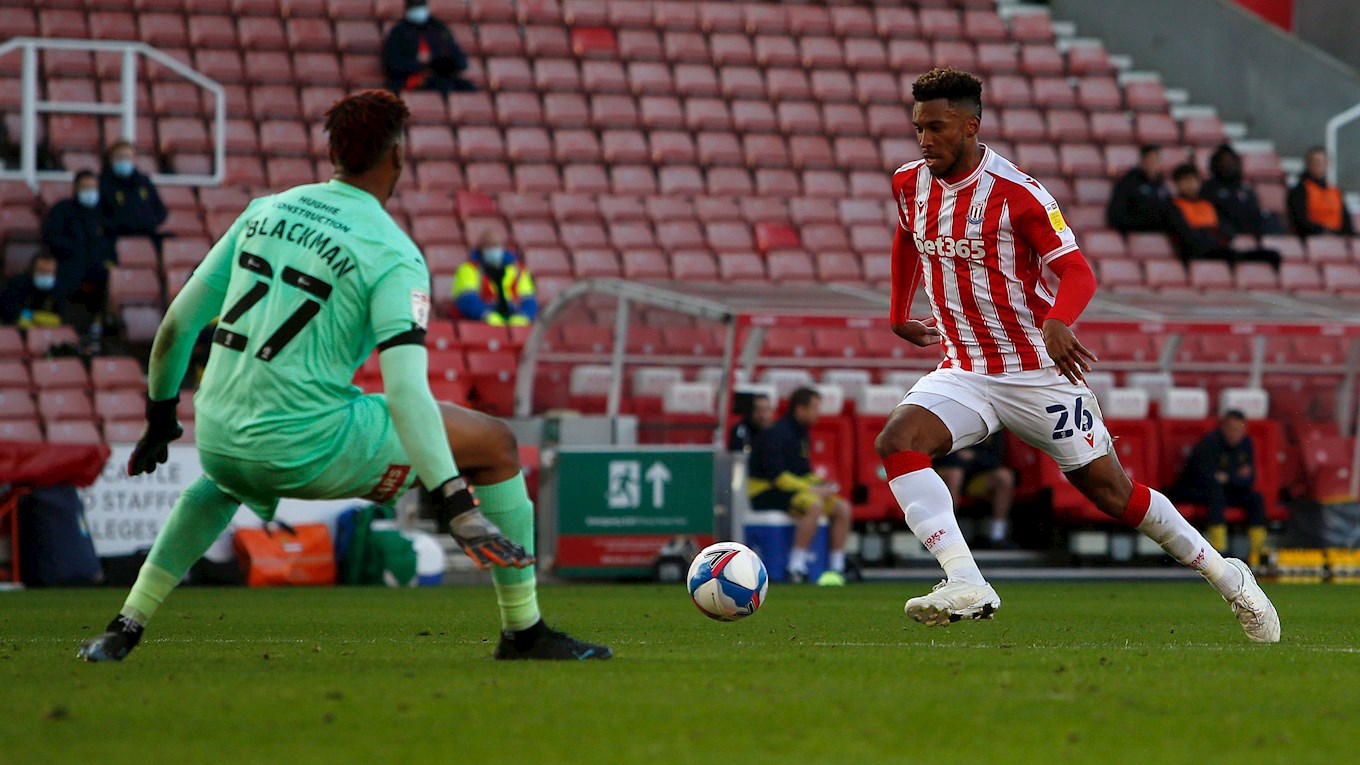 Summer recruit Steven Fletcher has bags of Championship experience and is Stoke’s top scorer this season!

The 33-year-old target man, who has played in the Premier League, Scottish Premier League and French top-flight, has started eight league games this year and has been their main outlet going forwards.

Known for his aerial ability, Fletcher has bagged four goals this season. 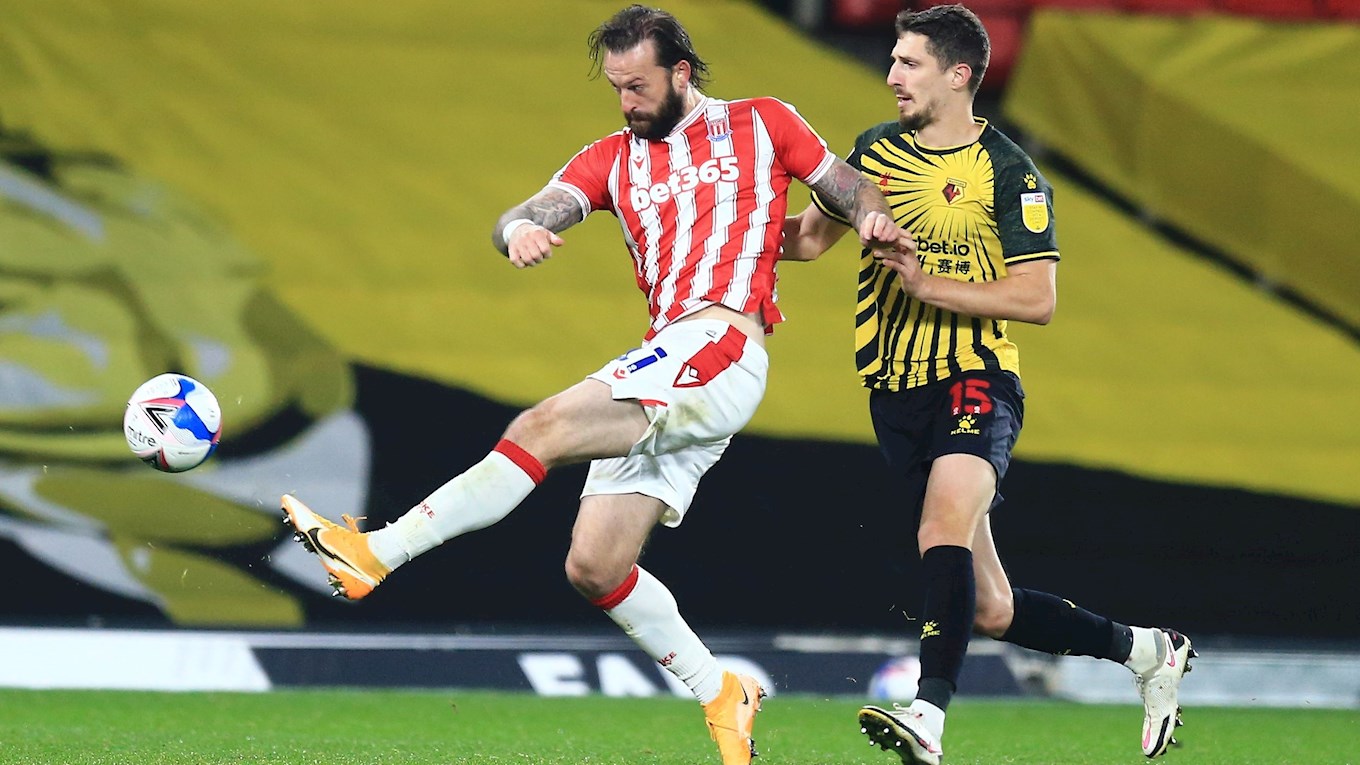 It’s the hosts who go into the meeting with the better of the record in the fixture, winning 29 of the 76 competitive meetings to Town’s 22.

They’ve also had the edge in recent meetings too, losing just one of the last seven games between the sides dating back to March 1998.

Town, however, were victorious on their last trip to the bet365 Stadium! Juninho Bacuna scored a last-minute winner!

Saturday’s meeting with the Potters is one of 11 games in the Sky Bet Championship.

Carlos Corberán will provide an update on his side ahead of Saturday’s game during his virtual press conference on Thursday 19 November 2020.

The Terriers will be in the yellow and purple away kit against Stoke City – CLICK HERE to get yours!

As per the agreement between the EFL and Sky Sports, Season Card holders will not receive this game for free.

Despite netting three goals, Huddersfield Town were beaten by Stoke City at the bet365 Stadium.

Town had taken the lead midway through the first half through Carel Eiting before a quickfire Tyrese Campbell double turned the game around prior to Isaac Mbenza’s leveller just before the break.

Stoke went into the half ahead following a Richard Stearman own goal and doubled that lead in the second period through Sam Clucas, with Naby Sarr’s header shortly after only turning out to be a consolation as the hosts held on to take all three points from an action-packed encounter in the Sky Bet Championship.

Carlos Corberán made three changes to his starting XI from the one that started in the final game before the international break.

Manchester United loanee Joel Pereira came in for his competitive Town debut with Ben Hamer unavailable, as he is currently in isolation for a confirmed contract/trace within his household.

Demeaco Duhaney and Isaac Mbenza also came into the Terriers side for the game at the bet365 Stadium.

A fortnight on from the last outing, Town returned to action with Stoke’s Sam Clucas getting the game underway in Staffordshire.

After a well-fought first half, the Terriers made the perfect start to the first of nine games in the period before Christmas.

Having made a lively start in the middle of the park, Carel Eiting fired home his second in successive games, volleying in Harry Toffolo’s flighted cross from the left to give Town the lead.

In what was an open encounter, the hosts hit back and quickly turned the game on its head.

A quickfire Tyrese Campbell just after the half-hour mark saw the Potters take a 2-1 lead with two goals in the space of three minutes.

The Stoke forward nearly had himself a third soon after. Steven Fletcher found his run with a neat flick, but Campbell’s shot was diverted away from the goal by Town debutant Joel Pereira.

Having kept the deficit at one, Town levelled the scores back up at the other end soon after. Eiting turned playmaker, neatly slotting in Isaac Mbenza who beat the offside trap and Joe Bursik in the Stoke goal to make it 2-2.

The hosts did restore the lead going into half-time, however, after Town were caught in possession high up the pitch.

It was Campbell involved again, winning the ball back before his powered effort across the penalty area was deflected in by Richard Stearman to put the Potters back ahead going in at half-time.

Just over 10 minutes after the break, Stoke Captain Sam Clucas extended that lead with an individual effort.

He drove in following a corner and fired through a crowd of bodies in the box to put the hosts 4-2 up.

Moments later, good work from Toffolo down the left won Town a free-kick which Mbenza found the head of Naby Sarr with to instantly reduce the lead back down to one on the hour mark.

The Terriers pushed for the equaliser as the game entered the final half-hour, with Eiting and substitute Juninho Bacuna both going close but without reward.

With the minutes ticking down, Mbenza hung a ball up to the back post that was cleared just before it could reach an unmarked Fraizer Campbell at the back post.

Late on, Danny Ward had Town’s best sighting of goal, but could only glance Toffolo’s looping cross wide as the hosts held on to take the points from an action-packed encounter at the bet365 Stadium.

Next up for Town is a visit to Adams Park to face Wycombe Wanderers in the Sky Bet Championship on Tuesday 25 November 2020; 7pm kick-off. 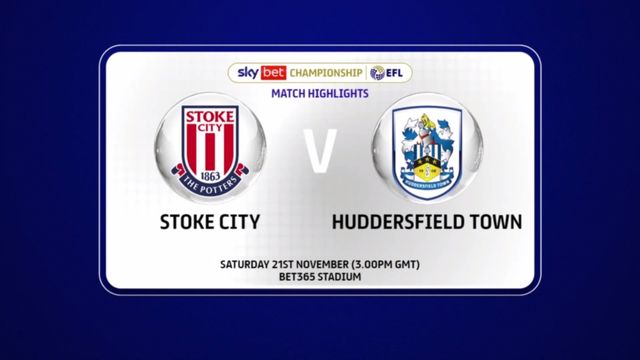 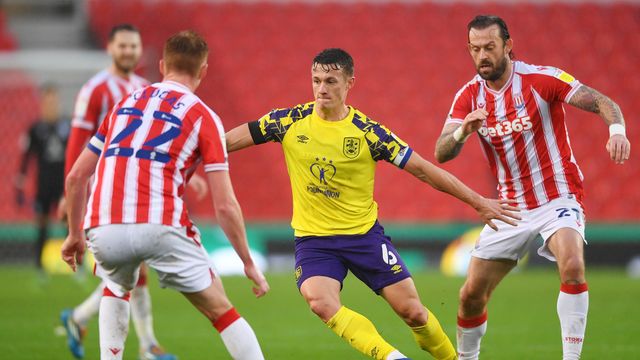