All the info you need ahead of Swansea’s visit

Huddersfield Town return to action with a second Sky Bet Championship game in four days at the John Smith’s Stadium when Swansea City are the visitors on Tuesday 26 November 2019; 7.45pm kick-off.

Danny Cowley’s side will be looking to go six games unbeaten at the John Smith’s following Saturday’s 1-1 draw with Birmingham City.

Fraizer Campbell had put Town ahead but a late Marc Roberts equaliser halted Town’s attempt to get back to winning ways.

The game is the second of two home games in the space of four days before a trip to Bristol City at the weekend.

The Swans come into the midweek encounter off the back of a 1-0 loss to Millwall at the weekend, following the international break.

Before the break, Steve Cooper’s side had gone three games unbeaten, climbing into the play-off places in the Sky Bet Championship table. 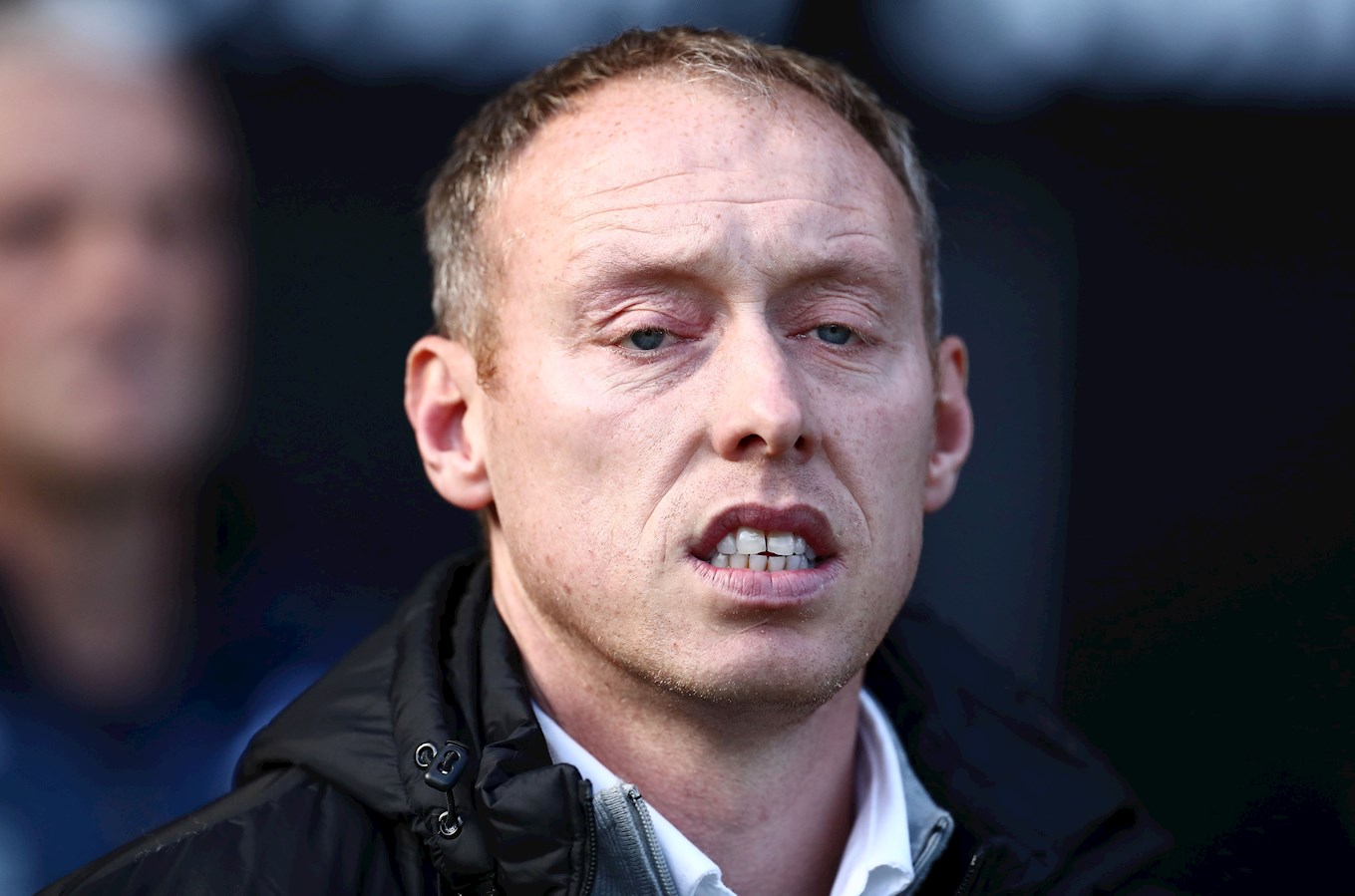 Wins over QPR, Leeds United and Charlton at the beginning of the season prove that Swansea are a strong side who are capable of winning on the road.

It means that the Swans have a mixed record on the road four months into the 2019/20 campaign, having only won at Wigan since those victories.

After 17 games of the Sky Bet Championship campaign, Swansea occupy sixth place in the table with 29 points.

The former Atletico Madrid man signed with the Swans in 2016, with his first season in the Premier League saw him make 20 appearances. However, only four of them were starts and he was only able to find the net once. That season the Swans were relegated to the Championship with Bastón going on loan to Malaga and Alavés before becoming a regular starter at the Liberty Stadium this season. So far in 2019/20, he has made 14 appearances, including 12 starts which has seen him score six goals and become Swansea’s joint top scorer in the league so far this season. 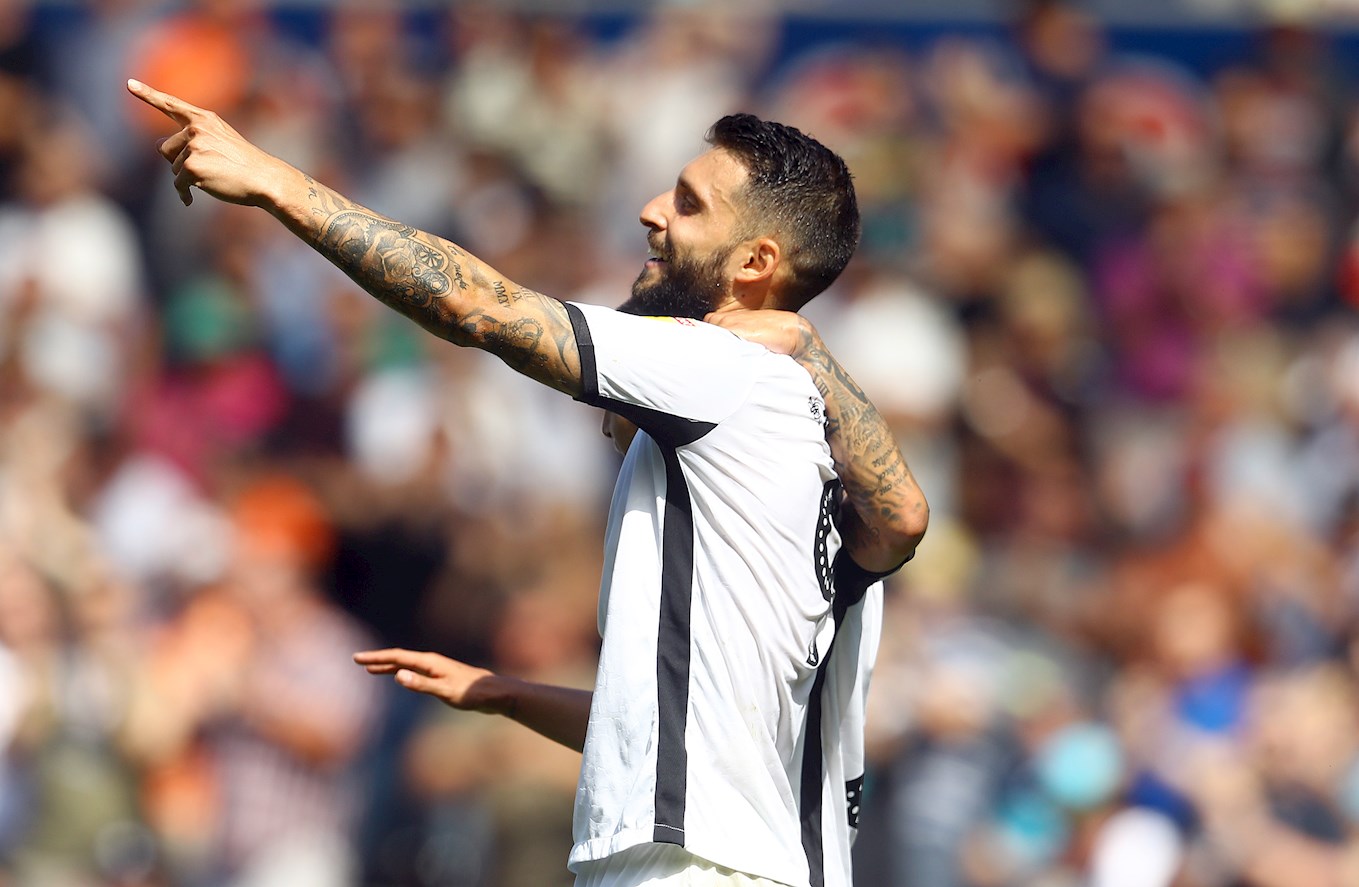 Swansea’s number 10 has appeared in every game so far and has started 16 of their 17 games. As well as this, Celina has one assist and two goals. Prior to signing for the Swans, Celina was at Manchester City for six years. Although he can play wide, which has been shown as he has been capped over 10 times for Kosovo, he is happiest in the No. 10 role. Since he joined the Swans in 2018/19, he’s demonstrated his quality throughout, chipping in with eight goals and regular assists across all competitions. 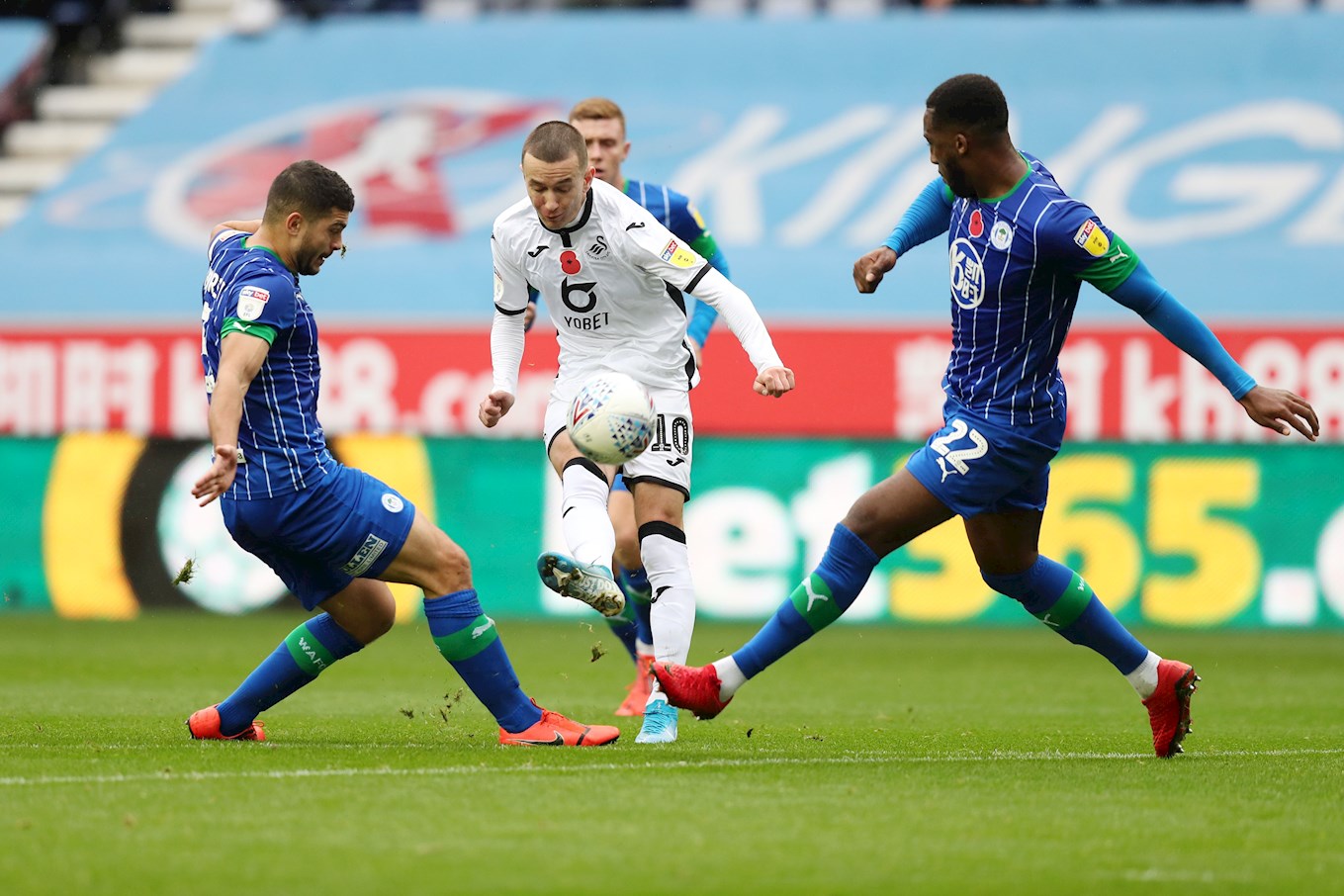 Ayew joined the Swans for the first time in 2015 and within his first month there he was named Player of the Month having made an immediate impact with three goals in his first four games. The following season, Ayew joined West Ham United and scored his first goal for the Hammers against Swansea. He then resigned for the Welsh Club in January 2018 where he played for a further 12 games and then went out on loan for the rest of the season. However, this season, the number 22 has played 15 out of the 17 games, scoring four goals and providing three assists. 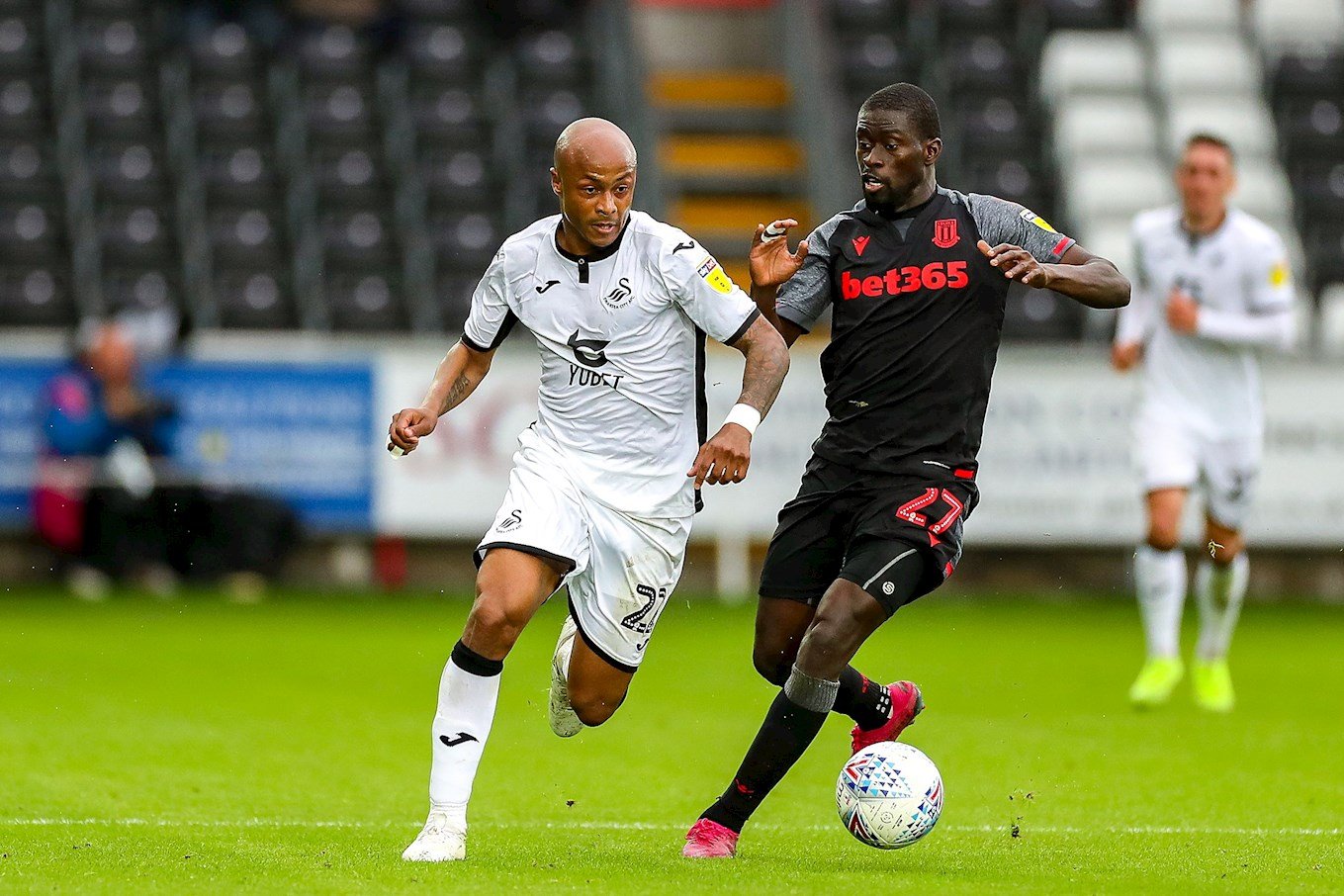 Manager Danny Cowley will give an update on Huddersfield Town’s latest team news at his press conference on Monday 25 November 2019.

With Town on home turf, they will be wearing the famous blue-and-white stripes for the visit of Swansea – CLICK HERE to buy yours!

Huddersfield Town were held to a 1-1 draw by Swansea City in the Sky Bet Championship on Tuesday evening.

The Terriers were the better of the sides for the majority of the game but Karlan Grant had to draw Town level shortly before half-time after Jay Fulton’s opener for the Swans. Trevoh Chalobah was sent off late on as the sides couldn’t be separated at the John Smith’s Stadium.

Town Manager Danny Cowley named an unchanged squad from the one that drew 1-1 at home to Birmingham City on Saturday.

It meant that the same starting XI took to the pitch for Town on a chilly evening at the John Smith’s Stadium. That familiarity showed inside two minutes as Elias Kachunga found Trevoh Chalobah who forced Swansea ‘keeper Freddie Woodman into action early, tipping the midfielder’s effort over the bar.

The visitors’ first threat at getting an opener came with a succession of corners on 18 minutes. After the first one was cleared behind, the second fell to Swansea midfielder Jay Fulton who fired his strike past Kamil Grabara at the near post to give the Swans the lead.

Having gone ahead moments earlier, the visitors nearly had a moment to forget at the back. Fraizer Campbell pressed Freddie Woodman and got close enough to slide for the ball but despite making contact, it rolled wide of the goal.

If anything, it was a statement of intent from Town. Danny Cowley talked in his match day programme notes about Town needing everyone to contribute for the team to be successful and that was evident as Town pressed high to win the ball back midway through the first-half, but Elias Kachunga’s low cross from the right was blocked and cleared.

Both sides continued to battle in what was turning into a physical encounter. A Town free-kick on the left side of the area was worked short and came to Alex Pritchard who fired towards the goal, only for his strike to deflect off Christopher Schindler and fall to Karlan Grant who tucked the ball into the bottom corner to level the game and go into double figures for the season on 41 minutes.

The goal ensured Town deservedly went in level at the break. Straight after the interval, Jon Gorenc Stanković made a good block to help deny a goal at one end, before another tip over the bar from Freddie Woodman stopped Alex Pritchard’s free-kick putting Town ahead.

Danny Cowley’s side continued to play with the momentum and were inches away from going ahead on 66 minutes. A Swansea clearance fell to Juninho Bacuna on the right side of the box, the midfielder connected sweetly, firing just wide of the goal and a whisker away from the head of Fraizer Campbell.

The John Smith’s Stadium was rallying behind Town in search of the go-ahead goal, with the atmosphere increasing as the game went on. Alex Pritchard was the next to go closest, seeing his curling effort from the edge of the box parried away on the dive by Freddie Woodman.

Swansea had soaked up the pressure for most of the half and went in search of their own winner late on, but Town ‘keeper Kamil Grabara, who had been kept relatively quiet throughout the night, was alert to stretch out his foot to make a good save.

The attention quickly turned back down the other end, but it wasn’t good for Town, as an off-the-ball altercation between Trevoh Chalobah and George Byers saw the former shown a red card and the Terriers reduced to 10 men for the final four minutes of normal time.

Danny Cowley swiftly moved to bring on Florent Hadergjonaj for goal-scorer Karlan Grant in an attempt to hold on to a point with a player less. It didn’t stop the Terriers from venturing forward in the closing minutes but neither side could get a late winner as the sides shared the points at the John Smith’s Stadium.

Next up for Town is a trip down to Ashton Gate to face Bristol City in the Sky Bet Championship on Saturday 30 November 2019; 3pm kick-off.