Everything you need to know ahead of Town vs Wigan Athletic

The 2019/20 Sky Bet Championship returns on Saturday, with Town's first match back in action coming on home soil against Wigan Athletic.

It'l be a first game for the Terriers since the West Yorkshire derby against Leeds United at Elland Road, over three months' ago, due to the COVID-19 pandemic.

Paul Cook’s side travel to the John Smith’s Stadium off the back of a deadlocked game against Luton Town at the DW Stadium.

In the reverse fixture in December 2019, Town claimed a valuable away point at the DW after Karlan Grant’s 70th minute strike annulled Josh Windass’ first half opener.

Most of Wigan’s season has been a display of their home strength, with the recording the majority of their current 41 points at the DW.

However, the Latics will come into the game hoping the break hasn't curtailed their momentum, having claimed 13 out of a possible 21 points away from home since the start of the New Year. 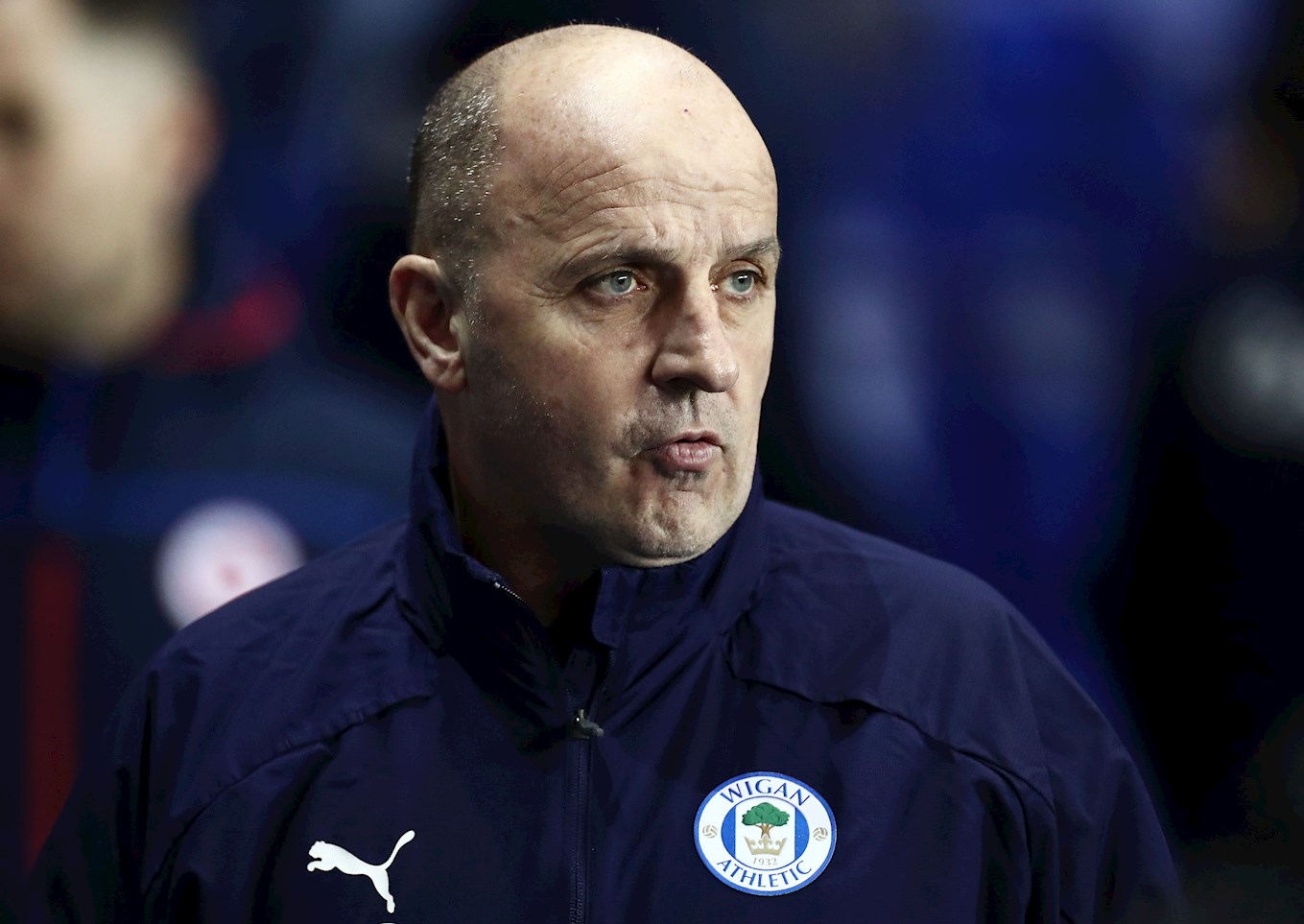 Paul Cook’s side will also be looking to extend their current unbeaten run to seven games, with their last defeat coming against Preston North End at the beginning of February.

This recent vein of form has seen them move out the relegation zone as they currently sit 20th – a point behind the Terriers.

The 25-year-old first met Cook in 2017, when the Portsmouth Manager (at the time) signed him from Hampton & Richmond Borough. The duo were reunited at Wigan Athletic when the forward signed a three-year contract ahead of the 2019/2020 season. He’s become a mainstay of Cook’s starting XI this season with 31 starts to his name. 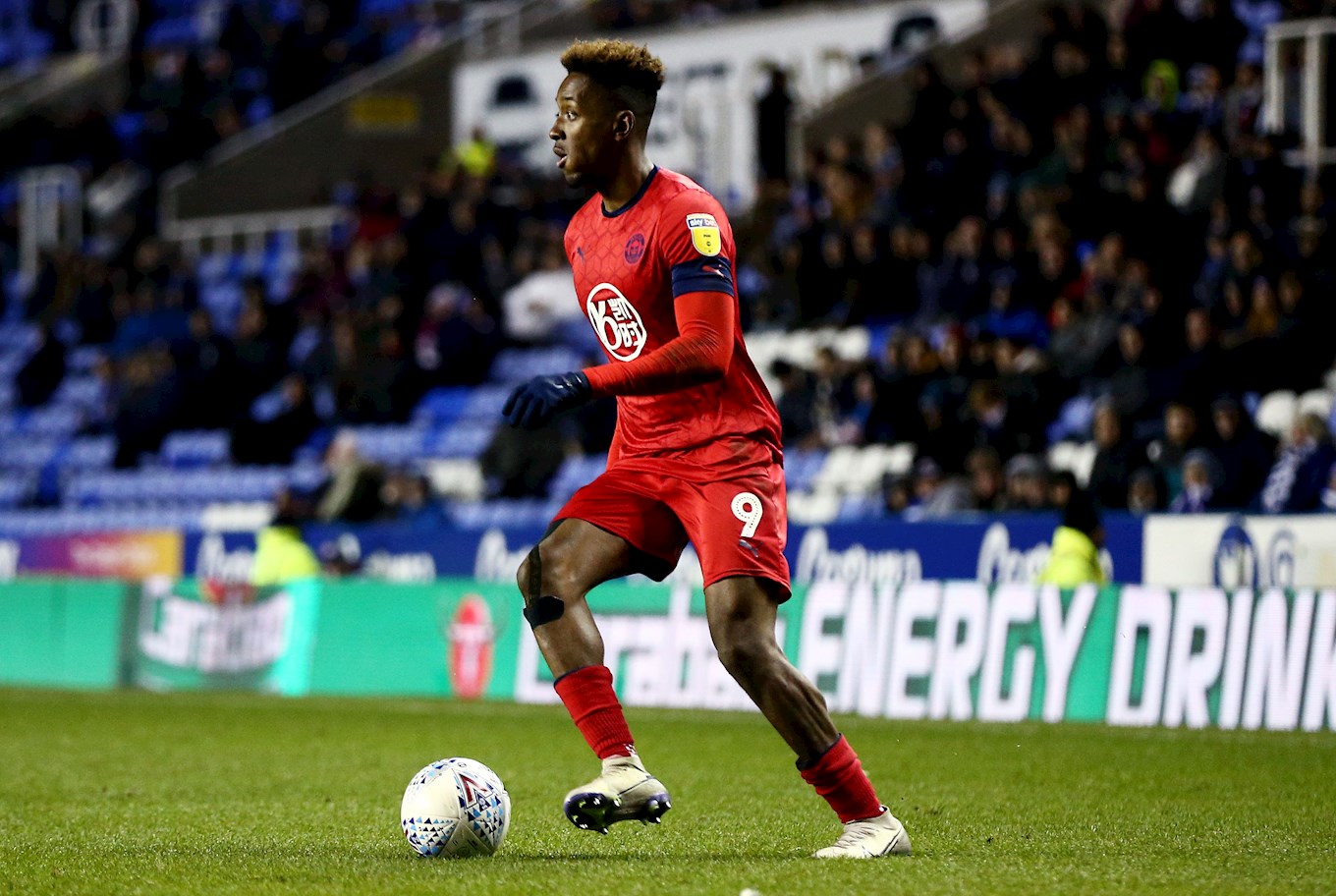 Former Terrier Pilkington joined Wigan from Cardiff City in January 2019. The Republic of Ireland international is an experienced forward, who now plays as a midfielder, and has scored two goals so far for the Latics. During his two years at Town, he bagged 19 goals in just under 100 appearances for the Club. 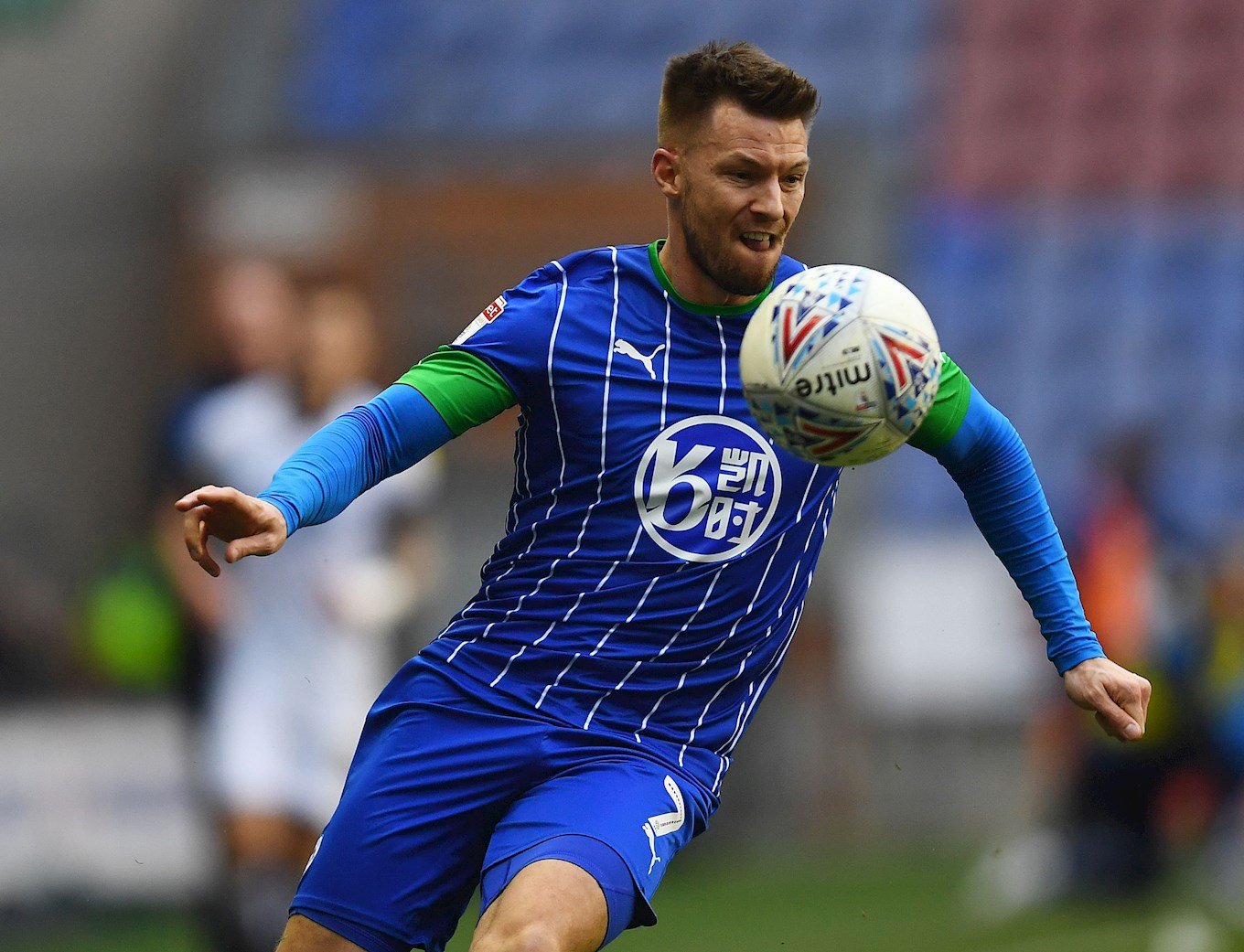 Egyptian international Sam Morsy has been at Wigan since 2016 and became Club Captain just over a year later in 2017. He made his place in Wigan’s First Team after playing a key role in helping them win the 2017/18 Sky Bet League 1 title and immediate promotion. So far this season he’s made 34 starts, netted three goals and bagged two assists. 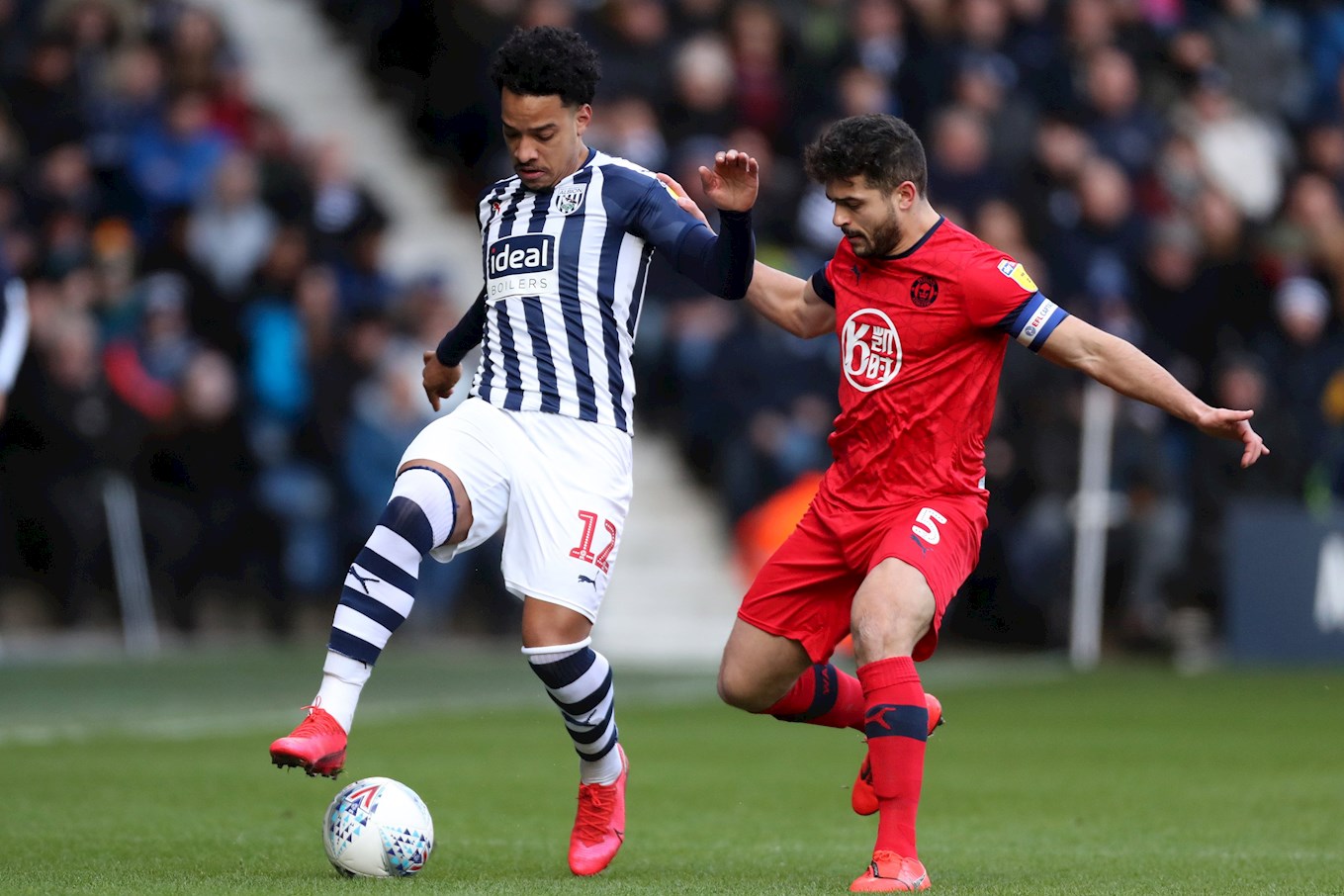 Tommy Elphick is still on the road to recovery from his long-term knee problem.

The Terriers will be wearing their blue and white home kit for Saturday’s game – CLICK HERE to buy yours!

2019/20 Season Card holders who have not taken a refund or e-credit will receive a code that will grant them free access to the game. Click HERE for more info on how that will work.

Goals either side of half-time from Jamal Lowe and Anthony Pilkington were enough for the visitors to leave West Yorkshire with all three points in Town’s first game back after the restart.

Prior to the kick-off that would signal football’s return to the John Smith’s Stadium for the first time since February, the two teams came together to deliver a powerful message in the warm-ups by sporting ‘Black Lives Matter’ t-shirts.

The sides also joined each other in a minute’s applause prior to kick-off, to thank all NHS staff and key workers for their efforts in fighting against the COVID-19 pandemic in recent months.

When the ball did get rolling again shortly after 3pm on a delightful afternoon in HD1, Town attempted to settle themselves in to the unfamiliar surroundings of an empty John Smith’s Stadium.

Despite the circumstances, Club Captain Christopher Schindler emphasised the need for the Terriers to get off to a quick start in the week, and he nearly led from the front inside three minutes.

The defender was picked out inside the box by a dangerous Juninho Bacuna free-kick but his header was cleared away from goal.

With both sides acclimatising to the return in the early minutes, Karlan Grant attempted to seize an opportunity to get straight back into the goals column after the ball was well won back by Lewis O’Brien high up the pitch.

Town’s top scorer worked the opening but saw his shot blocked by a Wigan defender.

At the other end, the visitors’ first opportunity of the encounter came through Anthony Pilkington. The former Town man made his way into the area before firing his effort straight at Town ‘keeper Jonas Lössl.

The scores remained level on that occasion, but shortly after the first drinks break of the game, Wigan made their growing pressure on the Town goal pay.

Kieffer Moore’s deflected low cross from the right was diverted into the net at the front post by Jamal Lowe to give the Latics the lead on 26 minutes.

Having gone behind Town attempted to drive their own energy with several promising openings as the game went past the half-hour mark.

On-loan Arsenal midfielder Emile Smith Rowe, playing from the left, curled an effort wide after a good exchange with O’Brien before Wigan ‘keeper David Marshall produced an incredible instinctive save to stop another Bacuna free-kick that had made its way through a crowded penalty area.

Straight from the resulting corner, having got the game’s only goal so far at the other end, Lowe was in the right place at the right time to block Grant’s latest close-range effort.

After going into the break behind, Town’s deficit in the game was doubled just three minutes after the restart.

Pilkington produced some neat footwork inside the Terriers’ penalty area before his scuffed shot took a deflection and found its way into the bottom corner to make it 2-0.

Having already got on the scoresheet once, Lowe tested Lössl once again soon, in search of the visitors’ third, but he could only find the side netting with his latest effort.

In an attempt to get back into the game, Danny Cowley began to utilise his increased number of allocated changes under the restart’s revised rules.

Alex Pritchard, Jon Gorenc Stanković and Elias Kachunga were all introduced, with Pritchard nearly making an immediate impact as his effort from the edge of the area whistled just past the goal.

Grant had scored Town’s equaliser in the reverse fixture at the DW Stadium back in December and attempted to get the Terriers back into this one too.

Having been found by Pritchard, the forward shifted the ball on to his right foot and fired at goal in search of a breakthrough, but his effort was wide of the target.

As the game ticked into the latter stages, the nature of the long break seemingly appeared to have its effect on the legs of both sides. Despite that, the Terriers continued to try and craft out chances, and a way back into the contest.

In doing so came Town’s best opportunity of the half. After some good work on the edge of the area, the ball was worked to Harry Toffolo who found some space on the left side of the box and flashed a shot across goal that was parried away by Marshall.

With the game reaching six minutes of added time, Lössl produced a fine double save to ensure Town’s slim hopes of getting something out of the game remained alive.

Lee Evans and Michael Jacobs both saw their efforts on goal stopped by the Town goalkeeper, before Pritchard curled a free-kick wide of the target at the other end.

The substitute’s set-piece was the game’s final real opportunity as Town’s restart began with a two-goal defeat to the Latics at the John Smith’s Stadium.

Next up for Danny Cowley’s side is a trip to the City Ground to take on Nottingham Forest in the Sky Bet Championship on Sunday 28 June 2020; 2.15pm kick-off.