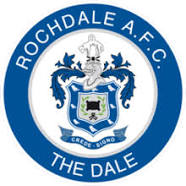 Jan Siewert’s side continued preparations for the new campaign with a 3-1 win over Sky Bet League One side Rochdale.

Town’s Head Coach named a relatively young team for the game with Rarmani Edmonds-Green partnering Christopher Schindler at the heart of defence, Ryan Schofield in goal and starts for summer signings Josh Koroma and Reece Brown.

The first chance at the Crown Oil Arena fell in favour of the hosts as Jonathan Hogg fouled his man to give away a free kick on the edge of the area. Rhys Norrington-Davies took the set-piece but fired his effort well over Ryan Schofield’s crossbar.

Rochdale had arguably had the better of the chances in the opening exchanges and took the lead inside the opening ten minutes. Norrington-Davies fired in an inch perfect cross that landed right on the head of Rochdale’s top goalscorer for last season, Ian Henderson to give them the lead.

Town were looking for a response and were working the ball into dangerous areas on the wings through Alex Pritchard and Josh Koroma.

Pritch soon played a neat ball into the path of an advancing Aaron Mooy who duly fired a wicked ball across the box. The ball ricocheted around and landed at the feet of Reece Brown whose powerful effort went wide of the near post.

Rochdale’s would not take their lead into the interval as Town struck a leveller. Alex Pritchard played in a delightful cross from the left flank that landed right on the head of Elias Kachunga at the far post who duly drew the scores level finishing in the top corner.

Town came out rejuvenated in the second half and would prove too strong for the team from a division below. Jonathan Hogg had the first chance of the half with a powerful effort from the edge of the area that stung the palms of the Rochdale ‘keeper.

An unlikely figure for goal action, Jonathan Hogg tipped the balance in favour of Town as he latched onto a through-ball to coolly finish past the Rochdale goalkeeper.

Hogg would then turn provider as Town killed off the game. The Terriers’ number six pressed to win the ball high up the pitch and played a neat ball into the path of Josh Koroma. The summer recruit from Leyton Orient found time to compose himself before finishing past Brad Wade in the Rochdale goal.

Jan Siewert utilised all four of the Young Terriers on the bench as Aaron Rowe was introduced and First Team debuts were handed to Scott High, Ben Jackson and Olly Dyson who all got minutes.

Next up for Town in pre-season preparations is a trip to face Doncaster Rovers on Wednesday 24 July 2019.