Huddersfield Town host Sky Bet League 1 side Lincoln City in the First Round of the Carabao Cup at the John Smith’s Stadium on Tuesday 13 August; 7.45pm kick-off.

Jan Siewert will experience his first taste of the Carabao Cup on Tuesday evening as the Terriers take on Lincoln City in the first round of the competition.

Last season, Town were knocked out in the Second Round of the competition after losing 2-0 to Stoke City.

As for opponents Lincoln, they also got as far as the Second Round last season losing 4-1 to Blackburn Rovers.

Supporters will be able to sit on the Fantastic Media Upper Tier, the Core Stand Upper and Lower Tier and home section of the Abzorb Stand.

Town will be wearing their home kit. Click here to buy it!

It has been a fantastic number of years for the Imps having achieved two promotions in three years from the Varanama National League up to Sky Bet League 1, all under the stewardship of Danny Cowley and his assistant - brother Nicky Cowley. 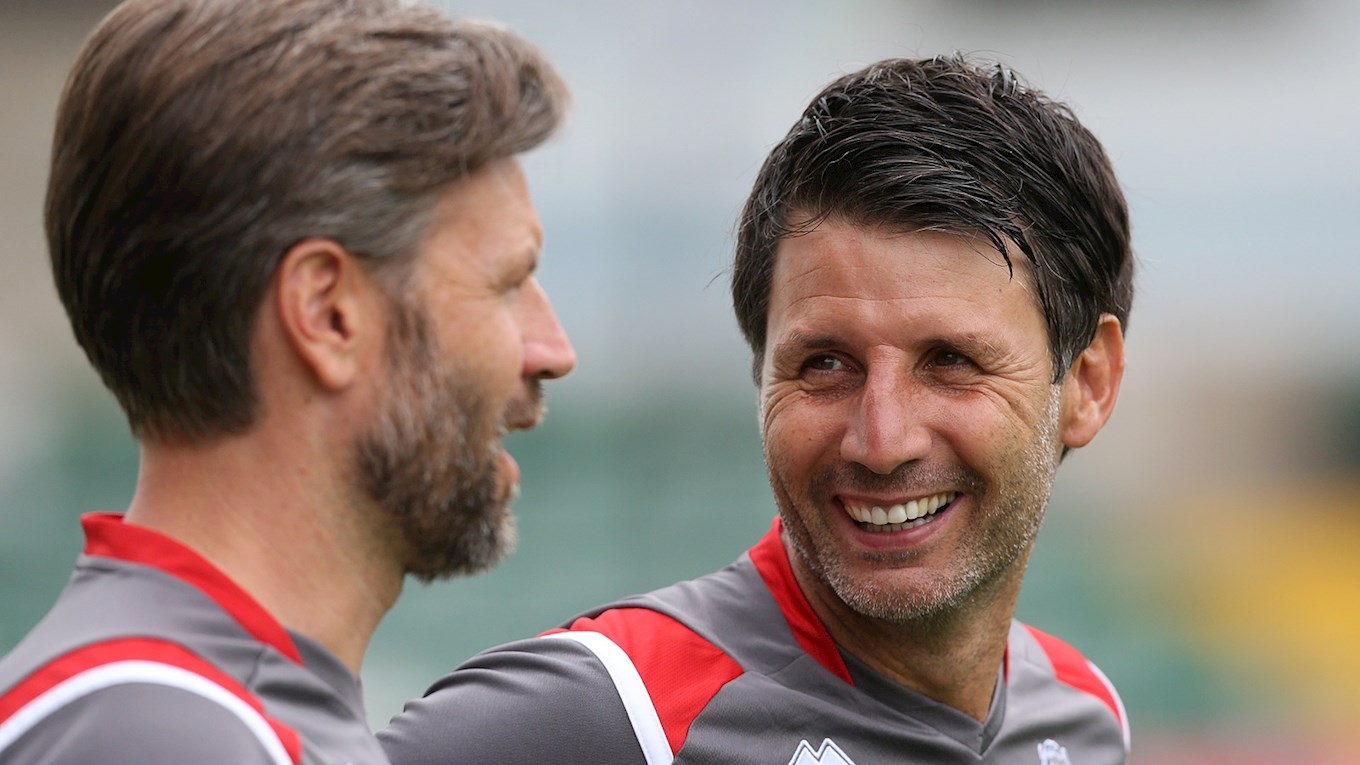 Last season, Lincoln were crowned Sky Bet League 2 Champions with 85 points, six points clear of their nearest challengers, Bury. The Imps now enter Sky Bet League 1 with optimism that they can achieve good things in the next tier of English football.

The Imps have managed to keep the majority of their squad together and strengthened their ranks with seven new signings.

Tyler Walker has signed on loan from Nottingham Forest to boost Lincoln’s forward line. His Forest teammate Jorge Grant has joined him at Sincil Bank which will add some extra creativity to Danny Cowley’s system.

On a personal note for Town, Jack Payne will return to West Yorkshire with the Imps having joined them in the summer.

The Imps have showed some pedigree in domestic cup competitions in recent times. Whilst navigating their way to National League glory in 2017, Danny Cowley’s side also managed to go on a miraculous run in the Emirates FA Cup - which included cup upset victories over Ipswich Town, Brighton and Burnley - where they reached the Quarter Finals of the competition. More recently, Lincoln won the EFL Trophy in 2018 after beating Shrewsbury Town 1-0 in the Wembley Final.

The 31-year-old signed for the Imps in the summer of 2017 from Peterborough United. Bostwick can operate in both defence and midfield, however it is in defence where he has shone most brightly for Danny Cowley’s men. He was a vital part of Lincoln’s team which achieved promotion to Sky Bet League 1, helping the team to 17 clean sheets and being named in Sky Bet League 2’s Team of the Year. 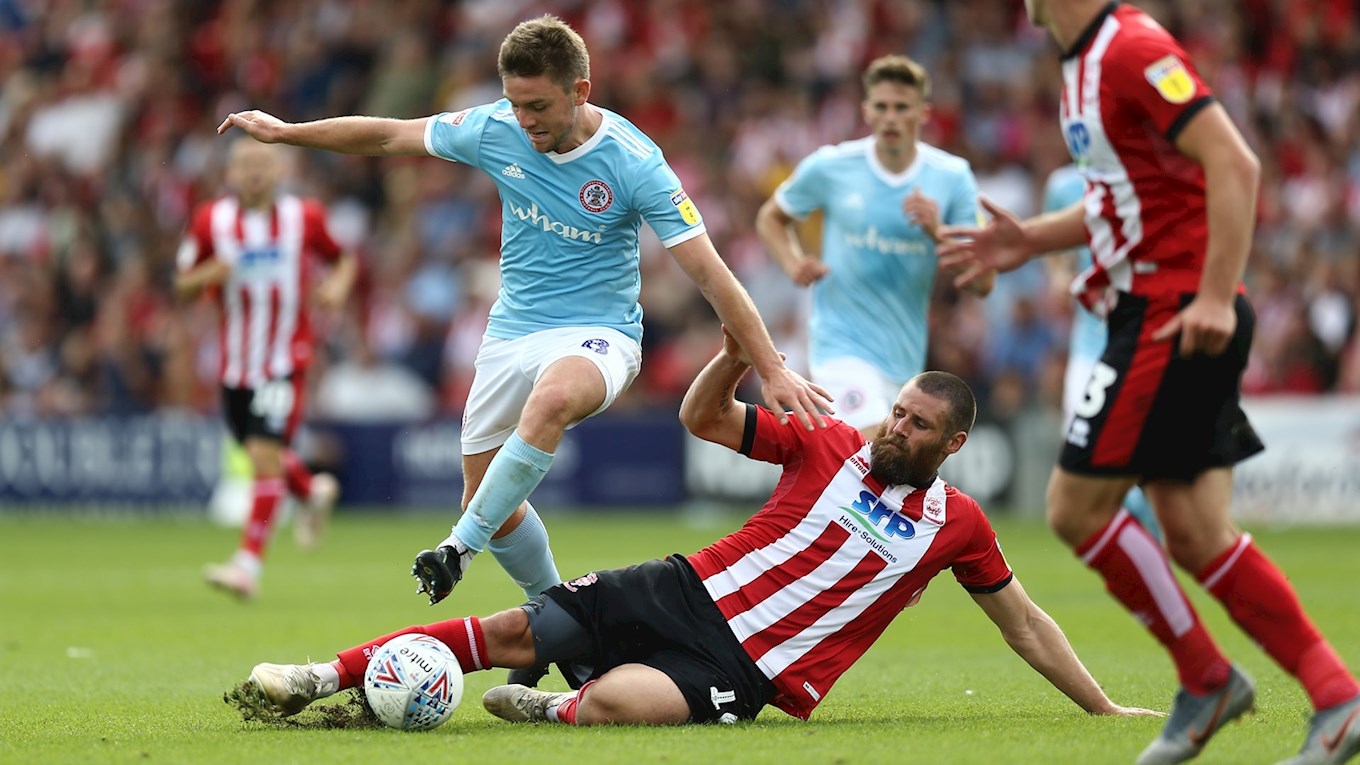 The midfielder has joined the Imps for the season on loan from Nottingham Forest. Grant spent time at both Luton Town and Mansfield Town last season and will be looking to impress in another loan spell, this time for Danny Cowley’s side. It is expected that he will add some creativity to Lincoln’s structured line up and will look to supply the likes of Tyler Walker and John Akinde up front. 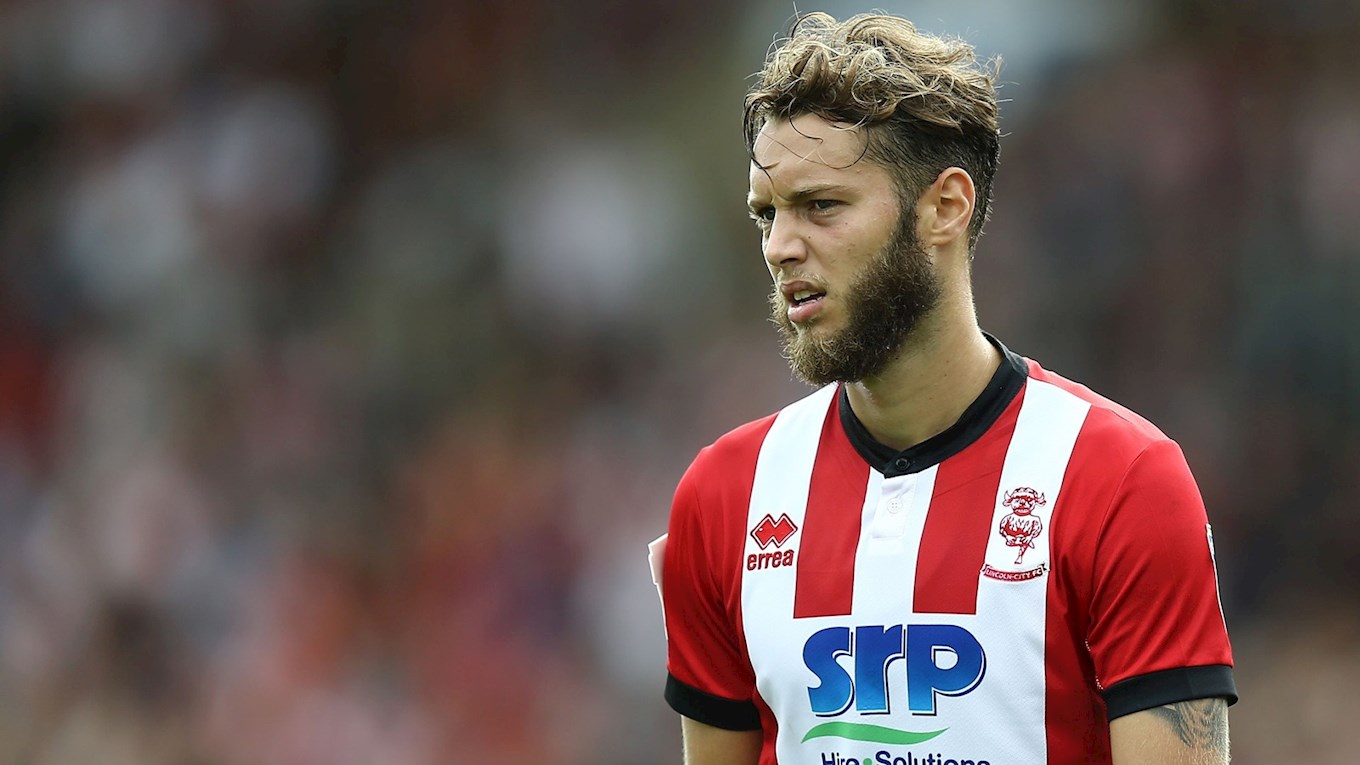 The young forward joins teammate Jorge Grant on loan at Sincil Bank for the season. Walker, the son of former footballer Des Walker, enjoyed a good season in front of goal last season as he managed 23 goals on loan at Mansfield Town. He’ll now make the step up to Sky Bet League 1 to prove himself once more and also to take the emphasis off last season’s marksmen John Akinde and Bruno Andrade who scored a third of Lincoln’s goals last season. 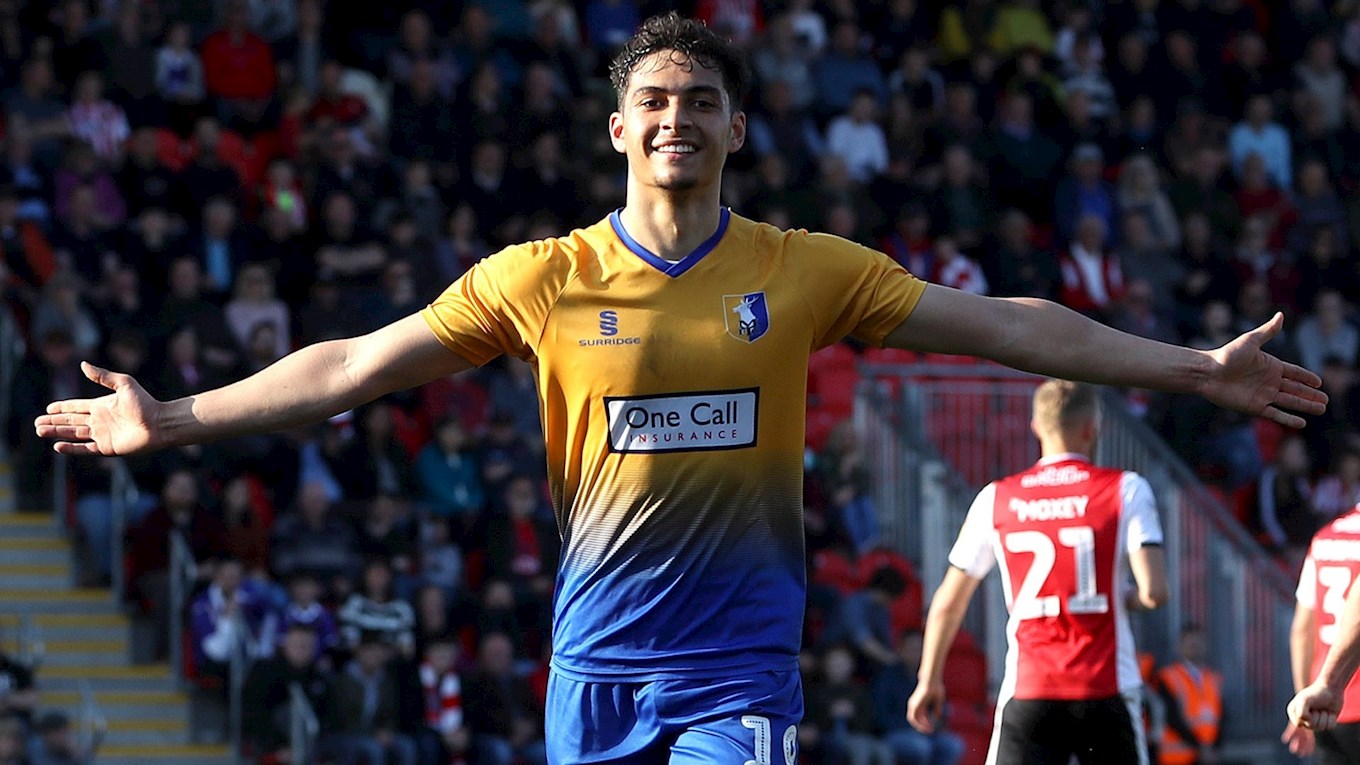 Midfielders Lee Frecklington and Tom Pett remain sidelined as they recover from their respective groin and knee injuries, while centre-back Jason Shackell has two matches of his suspension left to serve.

Huddersfield Town were knocked out in the First Round of this season’s Carabao Cup following a 1-0 defeat to Lincoln City at the John Smith’s Stadium after a below par performance.

Harry Anderson’s volley 10 minutes into the second half was enough for the visitors to progress to the Second Round of the competition.

Seven members of their starting XI were given their Huddersfield Town debuts by for the First Round tie against Sky Bet League 1 side Lincoln City, including new signing Trevoh Chalobah who joined the Terriers on loan from Chelsea last week.

The tie was well-contested in the early exchanges under the late evening West Yorkshire sunshine with neither side putting together any significant chances in the opening 10 minutes. It was Town who were closest to threatening the first goal of the game, but Isaac Mbenza’s whipped free-kick from the left was comfortably headed to safety.

Jan Siewert’s Terriers then threatened to put together a counter-attack after some good defending from Jon Gorenc Stanković, before Herbert Bockhorn blocked a first effort of the night from Lincoln forward John Akinde.

The Imps have been known for their threat from set pieces in recent times and nearly forced the opening on two occasions from dead ball situations shortly before the 15-minute mark; Elias Kachunga headed behind a Joe Morrell free-kick before Ryan Schofield tipped over Michael Bostwick’s header from the resulting corner.

Schofield, making his debut for his hometown club, was in the action again moments later as he rushed out well to close down a Lincoln attacker who dispossessed Rarmani Edmonds-Green inside the Town box.

The young goalkeeper was having quite the first 20 minutes on his senior debut, again coming off his line to prevent John Akinde’s attempted lob during a one-on-one.

Having kept out the visitors at the other end, Town put together a neat move that worked its way to Isaac Mbenza in space on the right. The forward cut inside before seeing his shot cleared from immediate danger.

Despite possession moving swiftly up the other end, Schofield was soon back in the thick of things, producing a smart double save to ensure the deadlock was maintained.

With 10 minutes until half-time, the Terriers continued to push forward in search of the opening goal and went close but Isaac Mbenza’s free-kick could only pinball around the penalty area before Rarmani Edmonds-Green’s shot was collected by Grant Smith in the Lincoln goal.

Smith was forced into action again on 42 minutes, denying Town’s best effort of the game so far. The ‘keeper leapt to his right to parry away Juninho Bacuna’s effort from the edge of the area, before getting back on his feet to stop Jaden Brown’s well-driven strike.

It was a case of déjà vu in added time as Bacuna unleashed a goal-bound strike that Smith again got down to tip around the post, with the deadlock remaining intact at the break.

Town may not have wanted the half-time whistle to come but came back out with the same momentum that they ended the first 45 with. Herbert Bockhorn did well to intercept a loose Lincoln pass before playing in Koroma on the right who saw his cross fumbled, but eventually gathered by Smith.

From one goalkeeper to another; moments later Ryan Schofield continued what had been an impressive debut so far, stopping Jack Payne’s curling effort from finding the net.

Town couldn’t keep the visitors out from the next attack on 55 minutes, however. Winger Harry Anderson found himself unmarked at the back post and with time to pick out the bottom corner with a volley, giving the Imps the lead.

Lincoln nearly doubled their advantage soon after but visiting midfielder Jack Payne dragged his shot wide of the goal from the edge of the box.

Searching for an equaliser, debutant Reece Brown tried his luck from range after a neat turn, but his strike fell wide, shortly before Juninho Bacuna’s prodded effort was deflected away from the goal.

In need of a spark Town Head Coach Jan Siewert sent on Rajiv van La Parra in place of Josh Koroma and the substitute very nearly provided one; finding Bacuna on the edge of the box who stung the hands of the Lincoln ‘keeper with a well-struck goal-bound effort, but the score remained 1-0 heading into the final 15 minutes of the tie.

Steve Mounié then entered the fray replacing Reece Brown but the Sky Bet League 1 outfit continued to stand strong and frustrate Town who were throwing bodies forward in search of the tie-saving leveller.

The visitors then nearly ended all hope of a lifeline for Town as Tyler Walker’s low cross from the left fell to Jack Payne less than two yards out but the midfielder couldn’t connect with the ball cleanly, with Ryan Schofield there to keep it out to Town’s relief.

Rajiv van La Parra continued to cause problems for the Imps defence after coming on, his latest drive forward saw him pick out Herbert Bockhorn who fired a shot over the bar from around 20 yards out.

Having been provider in the previous attack, van La Parra then went close himself, seeing his first-time curling strike deflected before producing another save from Grant Smith.

From the resulting corner, Town had two penalty shouts waved away, for a handball and a challenge inside the box respectively, but the visitors maintained their advantage as five minutes of stoppage time was added on.

The Terriers pushed forward in the closing stages with Steve Mounié going nearest to the equalising goal, but it was Town who came up short with the visitors holding on for a narrow victory to progress to the Second Round of this season’s Carabao Cup.

Next up for Jan Siewert’s side is the visit of Fulham to the John Smith’s Stadium on Friday evening (16 August 2019) in the Sky Bet Championship.