After working hard over the summer, Jan Siewert’s side is unbeaten this pre-season, with the most impressive results being a victory over Bundesliga II side Hamburger SV and a draw against Ligue 1’s Montpellier HSC.

The Terriers will be looking to kick start their return to the Sky Bet Championship with a victory over a team that will also be looking to push for promotion. Whereas Derby will be hoping to get Phillip Cocu’s reign underway with three points.

The last time the two sides faced each other was in April 2017 where Town secured a point on the road at Pride Park. Monday’s visitors last visit to the John Smith’s Stadium saw Elias Kachunga score a 93rd minute winner for the Terriers in a 1-0 victory.

Tickets are still on sale for Monday night’s match at the John Smith’s Stadium. This is your chance to get behind Jan Siewert’s side and make a real difference! Click here to buy!

Town will be debuting the new 2019/20 home kit on Monday night’s game! Click here to buy this season’s kit!

Phillip Cocu was announced as the new manager of Derby County earlier this summer following the departure of Frank Lampard to Chelsea. The former PSV and Fenerbahce Manager will be hoping to go one step further than his predecessor, with the Club missing out in last season’s Play-Off Final. 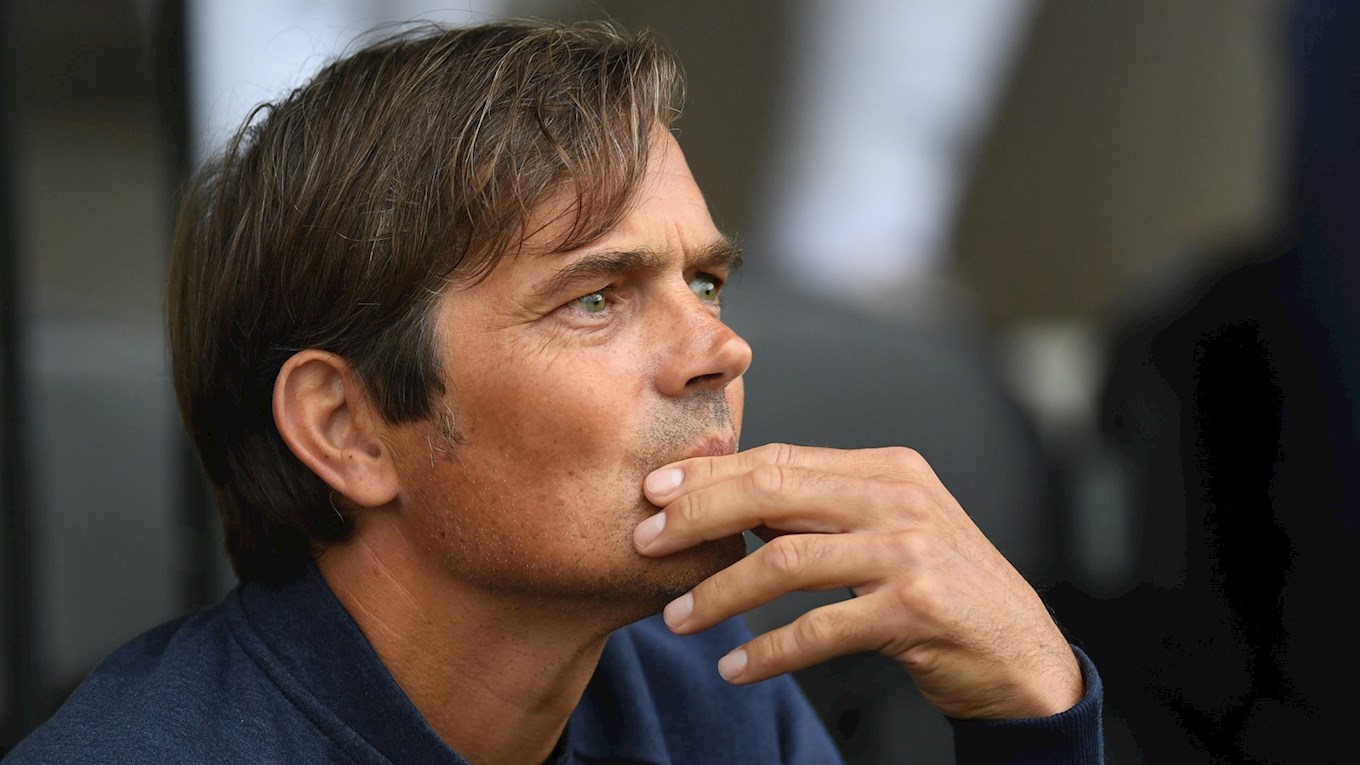 The Rams booked their place in the Play-Offs with a 3-1 win against West Brom on the final day of the season. They faced Leeds United in the Semi-Final’s and lost 1-0 at home in the first leg. Derby travelled to Elland Road for the second leg and overturned the deficit by beating Marcelo Bielsa’s side 4-2 after extra-time.

Unfortunately for the Club it was Aston Villa who secured their place in this season’s Premier League, goals from Anwar El Ghazi and John McGinn were enough as Villa beat Derby 2-1 in the Play-Off Final at Wembley Stadium.

Derby will have a different look to their frontline this year as top goal-scorer Harry Wilson and midfielder Mason Mount both returned to their retrospective clubs following successful loan periods.

The Rams strengthened their squad, however by bringing in midfielders Graeme Shinnie on a free transfer and Kieran Dowell on loan from Everton.

Martyn Waghorn joined Derby from Ipswich Town before the 2018/19 season. The striker scored nine league goals for the Rams last term and will be looking to build on that tally.

Waghorn made his professional debut in 2007 for Sunderland, a Club he had been with since the age of eight. The former England U21 international went on to play for eight different clubs before joining Derby last summer. 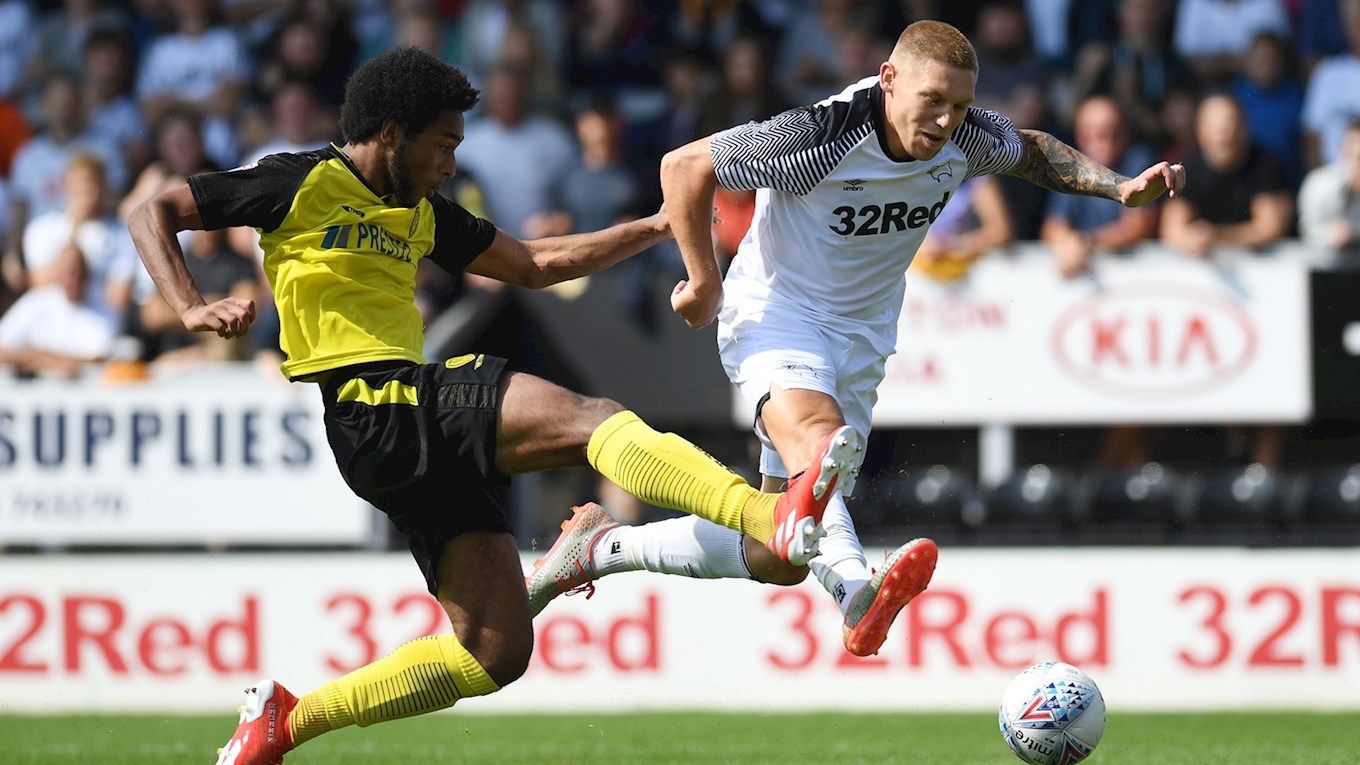 Derby skipper Richard Keogh joined the Club from Coventry City ahead of the 2012/13 season, since signing he has gone on the make 308 league appearances.

Keogh spent his youth career at Ipswich Town and Stoke City, but it was with Icelandic-side Vikingur where he made his senior debut in 2004, playing in the Urvalsdeild. The John Smith’s Stadium will be a familiar sight for the centre-back, as he spent a short loan spell at the Club during the 2007/08 season.

He has represented Republic of Ireland at international level, making 21 appearances for his country and in 2014 was named as an international captain for the first time. 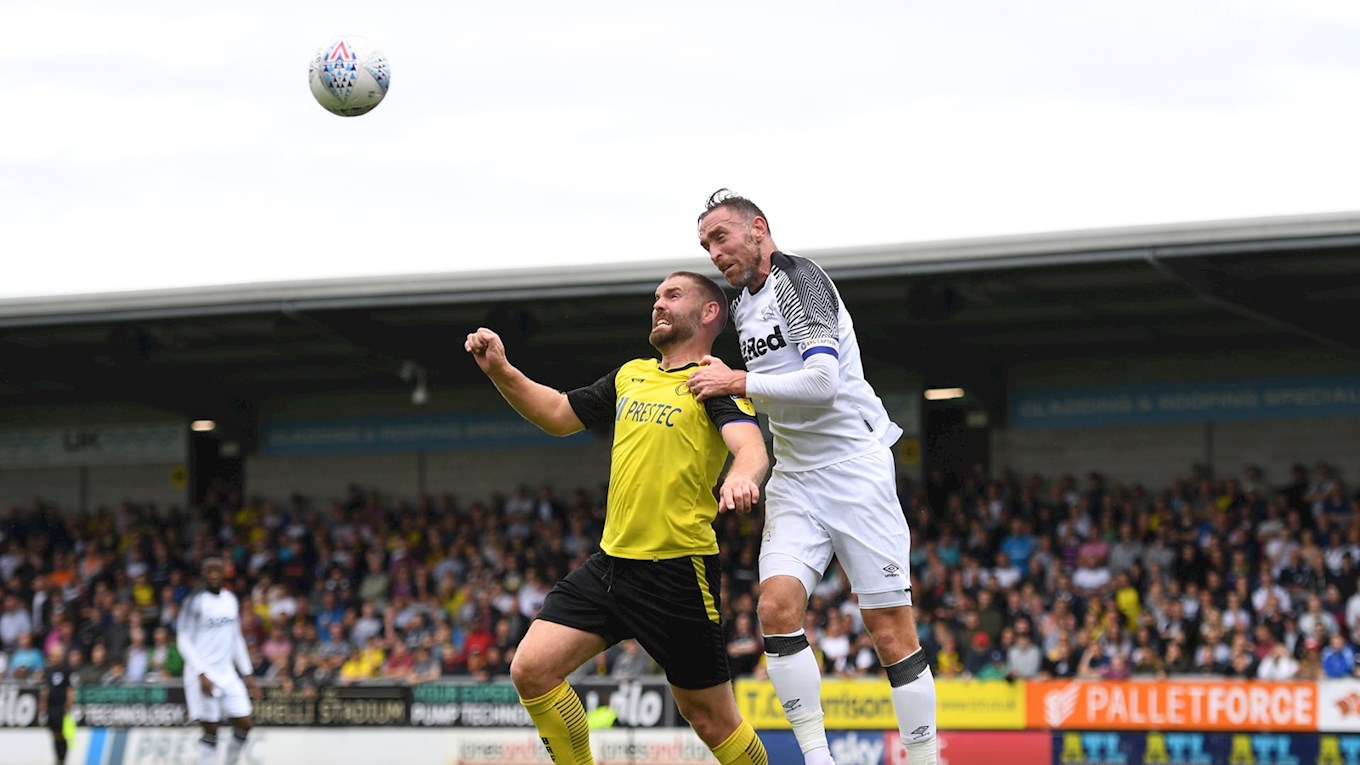 Tom Huddlestone returned to his boyhood Club Derby County ahead of the 2017/18 season following 12 years away from the Rams. He spent eight seasons at Tottenham Hotspur in the Premier League before signing for Hull City in 2013.

During his time at Tottenham, Huddlestone was called up for the England squad, and went on to received four caps, the first being in 2009. 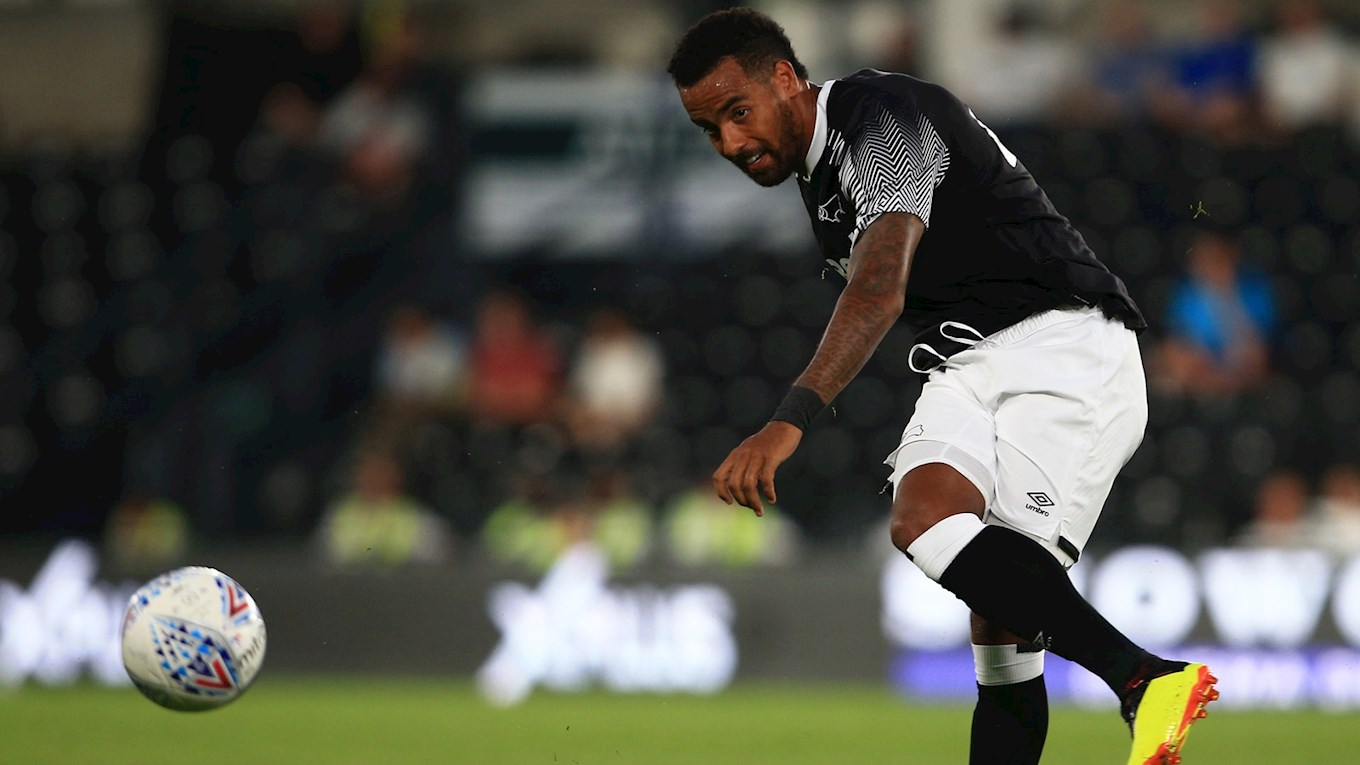 Phillip Cocu may have some injury concerns ahead of the game. Andre Wisdom is nursing a knee injury and Duane Holmes has been out recently with a hamstring injury.

Meanwhile, George Thorne, Jack Marriott and Scott Carson are all carrying knocks, and may not be fit to play on Monday night.

New signings Tommy Elphick, Herbert Bockhorn, Reece Brown, Josh Koroma and Kamil Grabara could be in line to make their professional debuts for the Club.

Huddersfield Town began life back in the Sky Bet Championship with a 2-1 defeat at home to beaten Play-Off finalists Derby County on Monday evening.

A first-half brace from Rams’ winger Tom Lawrence put the visitors in the driving seat before Karlan Grant’s penalty got Town back into the game, but it was the visitors who held on to take three points on the opening weekend of the season.

Town Head Coach Jan Siewert named a strong side for Monday night’s season opener with new signings Kamil Grabara and Tommy Elphick named in the starting XI with Herbert Bockhorn on the bench.

The John Smith’s Stadium was rocking ahead of the clash under the early evening West Yorkshire sunshine. The Terriers fans were even louder just three minutes in, urging Adama Diakhaby on as he powered into the box and past two Derby defenders before Richard Keogh got back to make a vital tackle.

Up the other end, Derby County’s new Manager Phillip Cocu saw his side’s best chance of the opening exchange come courtesy of a Tom Lawrence free-kick that was flashed wide of the goal.

The game was well-contested early on, but it was Town who attempted to break from the shackles and get on top. Neat feet from Alex Pritchard worked an opportunity for Diakhaby on the edge of the box; the winger sent a defender to the ground before seeing his shot blocked.

Despite putting together the best move of the game so far, Town were made to pay for a moment of confusion at the back. The ball broke to Derby’s Tom Lawrence on the edge of the area who lobbed Grabara to give the Rams the lead.

Jan Siewert’s Terriers responded well however and were nearly level straight from the kick-off. Alex Pritchard cut in from the left and bent a strike towards the far top corner, but it went just over the bar.

From the goal-kick, the visitors put together a move that saw them double the lead in quick succession. Tom Lawrence twisted and turned on the edge of the area before finding the net with a curling strike to double both his and Derby’s tally for the evening.

Again, Town came back fighting and had a reward for their efforts soon after. On-loan Derby midfielder Kieran Dowell brought down Juninho Bacuna inside the box before Karlan Grant stepped up to slot home and get the Terriers on the board.

Town, wearing their new home kit for the first time in a competitive game, had to be alert to not let the visitors restore their two-goal deficit just after the half-hour mark. Debutant Tommy Elphick stretched to his right to block a goal-bound Martyn Waghorn attempt.

Elphick was again in the thick of the action to deny Tom Lawrence working a chance for his hat-trick. Town’s new no.4 produced a perfectly timed tackle to push the ball away from the Derby winger.

Having soaked up defensive pressure, the Terriers broke forward through Diakhaby, who raced 50 yards forward before laying it off, only for it to come back to him on the edge of the area for a volley that flew just over.

Moments before half-time, Kamil Grabara got down to his left to make a sharp reaction save to deny Martyn Waghorn shortly before the whistle blew for the interval.

It was Town who came out of the blocks quicker in the second period, with a brave save from Derby ‘keeper Kelle Roos preventing Town skipper Christopher Schindler from levelling the scores, just after the restart.

Town midfielder Aaron Mooy had showed the quality to the defensive side of his game with several well-fought interceptions in the opening stages of the half before his attacking side was on show to nearly get the Terriers level on 57 minutes. His driven shot swerved just wide of the far post from the left side of the box.

Shortly before the hour, Juninho Bacuna was forced off with an injury with Isaac Mbenza replacing him as Town looked to step up their search for a second goal. Elias Kachunga also entered the fray in place of Adama Diakhaby.

Having just come on, Kachunga was presented with a golden opportunity having been picked out by Terence Kongolo at the back post, but after taking a touch the winger fired his shot over the bar.

With less than 10 minutes to play, Cocu’s side continued to sit in and frustrate Town who were pushing for a late leveller. After a good show of strength, Isaac Mbenza got past the defender before unleashing an effort that flew wide of the goal.

Two minutes of regular time were left on the clock when Jan Siewert made his final roll of the dice, bringing on Collin Quaner in search of a last gasp equaliser.

The game continued to be played in the opposition half in the final minutes with the Terriers pushing forward for a late goal that would have delighted the majority of the 22,696 inside the John Smith’s Stadium, but it was the visitors who held on to give Phillip Cocu his first win as Derby County manager on the opening weekend of the Sky Bet Championship season.

Next up for Town is a trip to the capital to face Queens Park Rangers on Saturday 10 August 2019 (3pm KO) in the Sky Bet Championship before returning to the John Smith’s the following midweek to host Lincoln City in the Carabao Cup.