As Premier League football returns this weekend, Huddersfield Town will travel to the West Midlands to face Wolverhampton Wanderers on Sunday 25 November 2018.

The match at the Molineux is live on Sky Sports and will kick-off at 4pm – almost a year since Town’s last 4pm Super Sunday fixture (Town vs Manchester City at the John Smith’s Stadium).

After being crowned Champions of the Sky Bet Championship, Nuno Espírito Santo’s side immediately caught the eye of Premier League supporters drawing with Manchester City at home in the third gameweek of the season.

That result seemed to inspire the Wolves side that went on to go unbeaten during the month of September. The Club beat West Ham United, Burnley and Southampton – getting a clean sheet in them all – whilst, also picking up a draw at Old Trafford.

The month of September saw Nuno Espírito Santo pick up the Premier League Manager of the Month award for November – the first time a Wolves Manager has ever won the award.

Coming into this game, Wolves sits 11th in the table and have won one game in their last five. However, they come into this game off the back of a 1-1 draw with Arsenal at the Emirates Stadium.

Town has won its last three games against Wolverhampton Wanderers all 1-0. The latest was in the Sky Bet Championship as Izzy Brown’s 20-yard effort secured the Terriers’ place in the Play-Offs.

After joining Wolves in the summer on loan from Benfica, Raúl Jiménez has been a key player for the West Midlands Club. The striker has scored three goals this season and set-up five for his teammates. Coming into this game, he has two assist and a goal in his last two games – Arsenal and Tottenham. 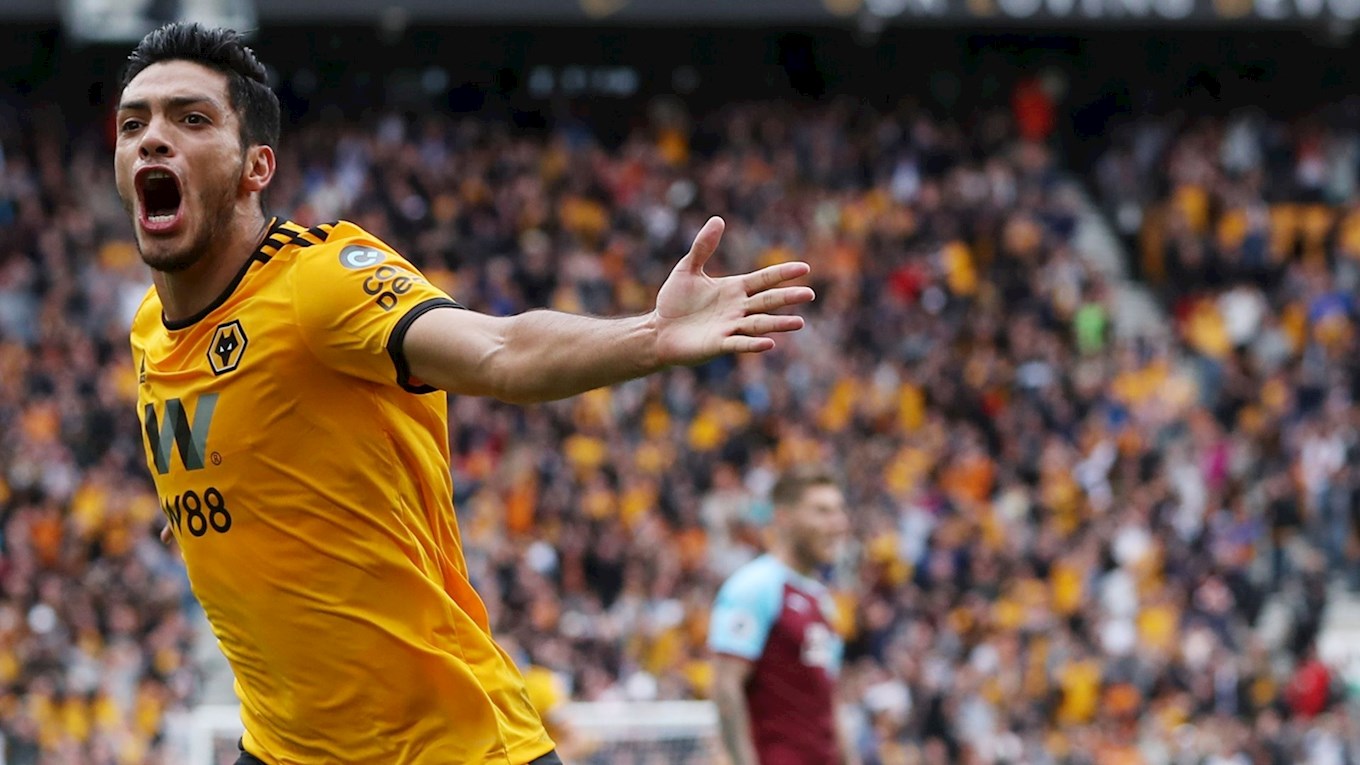 The winger was part of the side that won the Sky Bet Championship last season and has started Wolves’ last two games. Cavaleiro scored his second goal of the season just before the international break against Arsenal, his first came in the win over Southampton. 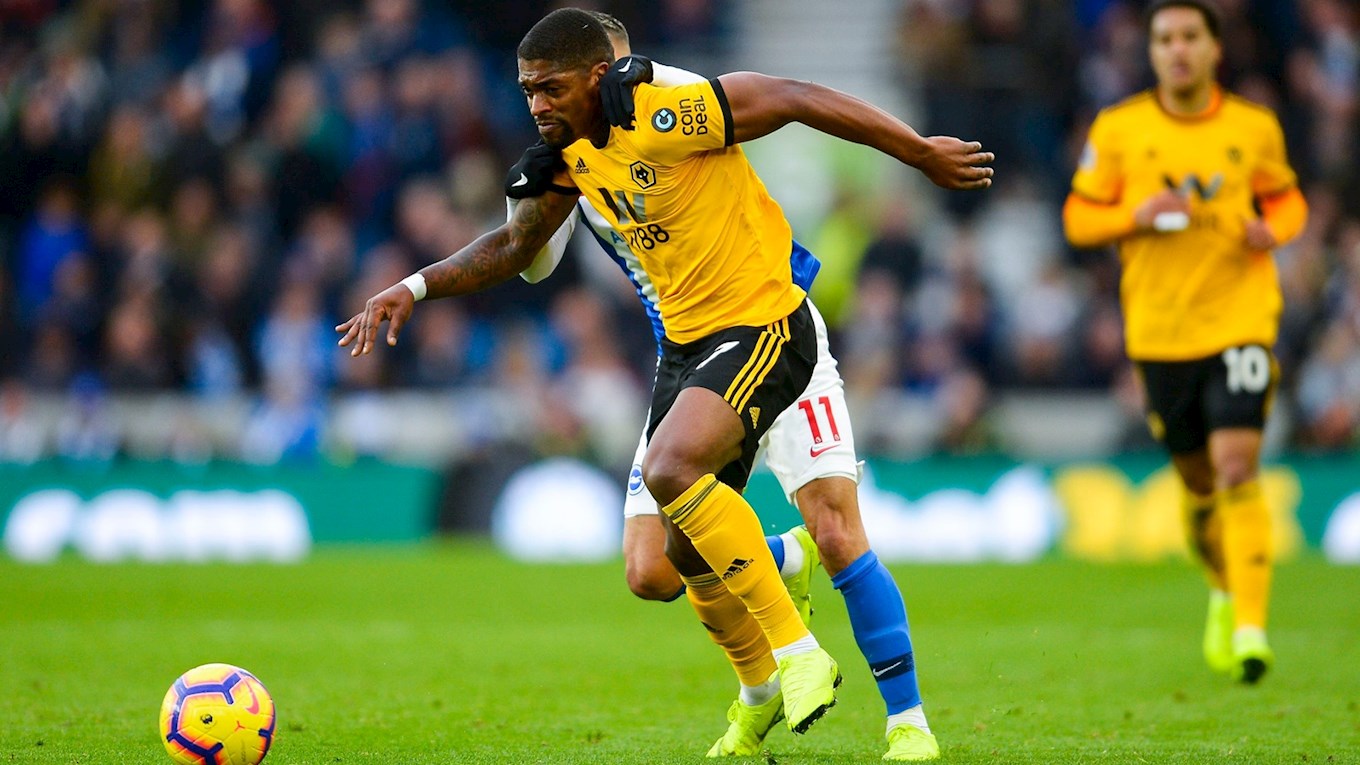 The 21-year-old midfielder has been one of Wolves’ most influential players so far this season. The Portuguese international dictates play and has an eye for goal. He has also scored twice this season (Everton and Tottenham Hotspur) and one assist. 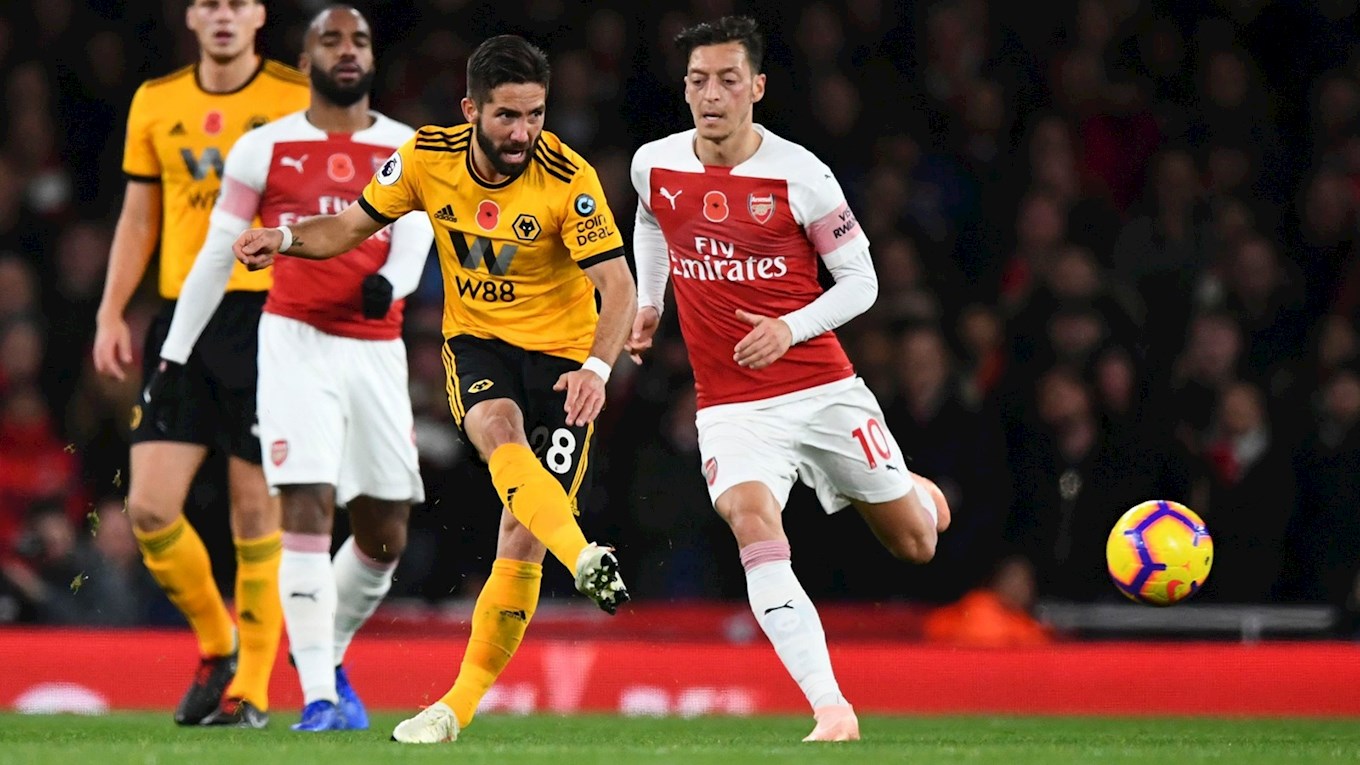 Mathias Zanka is suspended, however, after picking up a fifth yellow card of the season against West Ham United.

Tickets for Huddersfield Town’s Premier League game against Wolverhampton Wanderers are now on sale to supporters with 1+ Priority Points.

Town will be wearing the famous blue and white stripes at the Molineux.

A goal in each half from the Australian settled matters in the West Midlands, and performances across the board were supremely impressive to make it three unbeaten heading into December.

Two enforced changes were made to the side that shared the spoils with West Ham. Zanka (suspension) and Chris Löwe (shoulder) dropped out, replaced by Club captain Tommy Smith - only his second Premier League appearance of the season - and Erik Durm. Christopher Schindler made his 100th Huddersfield Town appearance on a cold afternoon in the Black Country.

Not quite the frantic start than the previous fixture, but an equally rewarding one nonetheless. Aaron Mooy's superbly placed finish from the edge of the area handed Town an early lead having withstood a number of Wolves' corners.

Aaron's first goal of 2018 arrived courtesy of excellent work to motor down the left and cross from the reinstated Erik Durm, who's pinpoint cross found its way to the perfectly positioned midfielder to deliver a highly welcome opener.

Wolves were coming into this game on the back of a thoroughly deserved draw at Arsenal and were always going to react. They were soon denied by an exceptionally timed sliding block from Terence Kongolo to halt Ivan Cavaleiro's goalbound run in its tracks.

However, it was the men from HD1 who looked the more likely to grab the second in the aftermath. Alex Pritchard capitalised upon a loose pass in centre field and drove forward with intent, only for a last-ditch Conor Coady block diverted a right-footed effort out of harms way.

Also out of harms way was a wayward strike from Philip Billing, as both sides tried their utmost to win tough individual battles without causing each other many problems in-front of goal; the Mooy effort being the only real chance of note as the half-hour mark passed.

Wolves always possessed a menace on the offensive front. Ivan Cavaleiro flashed a cross to the near post which was narrowly missed with a flick-on by Mexican International Raúl Jiménez, ahead of central defender Ryan Bennett specutively firing way over the bar from distance to relieve a somewhat mini period of sustained pressure.

At the other end, Steve Mounié thought he'd added to his headed goal tally for the week- scoring for Benin last Saturday- but an accurate unmarked attempt from goalscorer Mooy's corner fell graciously to Rui Patrício between the sticks.

The Portuguese stopper was called upon again shortly after Steve's initial effort, clutching another headed effort safely this time in the form of Terence Kongolo, who'd snuck in round the back to leap highest and nod for the top corner.

Arguments could've been made to say that the scoreline may well have had an even glossier look to it come the interval following the three late headed chances; the last of which- yet another attempt from an inspired Mounié- being desperately hacked away off the line by Matt Doherty during an almighty goalmouth scramble.

Regardless, it had been a positive first half in the West Midlands which the Head Coach would definitely have been delighted with in many senses despite only seeing just the one ripple the back of the net.

Nuno Santo's outfit were evidently out to right the wrongs of the first period. Christopher Schindler crucially denied Raúl Jiménez from latching onto a loose Tommy Smith touch as the on-loan Benfica forward shaped to fire for the corner in the search for the equaliser.

Jiménez came even closer in the follow up, climbing above Hadergjonaj to win the aerial duel. As the home crowd roared for the goal to be given, referee Kevin Friend's goal-line technology ruled that the striker's effort hadn't crossed the line literally by an amazing matter of centimetres.

Phil Billing responded by curling just wide as a result of a neat move between the lines; a bitterly cold Sunday evening thoroughly made all the more exciting by a flowing, exciting encounter on the field.

Jiménez again found himself through on goal, albeit as a result of the defensive line pressing up despite Kongolo on the deck with an issue, but Town were majorly let off the hook as no player in gold could steer home.

A spell of possession for the Terriers was almost capped with a killer second. Hadergjonaj's cross firstly floated inches over the head of the lurking Mounié on the penalty spot, ahead of Alex Pritchard's low driven shot being kept out only by the trailing foot of Patrício who'd got down well to thwart.

That possession may not have brought a goal; skip a minute on, and that notion was completely turned on its head as the Town second duly arrived.

Steve Mounié's surge through the heart was illegally halted, and there was that man Aaron Mooy to masterfully bend the resulting free-kick low around the wall and into the bottom corner; albeit via a strong hand from Patrício who's efforts to keep the lead at one ultimately fell short.

Each and every man in blue and white had been nothing short of magnificent; none so than Mounié, who's contribution in terms of commitment, skill and quality to hold the ball and work his socks off had been tremendous, all that was missing was a goal. A great sighting opened up as a deflection fell kindly, but Steve couldn't apply the right quality to the finish, fizzing over the bar.

That would be that on a terrific afternoon all-round for the Terriers. Action returns to Kirklees next Saturday with the visit of Brighton & Hove Albion (Saturday December 1, 3pm). 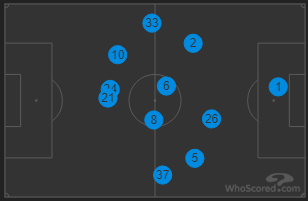