Both Town and West Ham played their part in a pulsating encounter from which the two sides could not be separated in the end.

Alex Pritchard's sixth-minute strike put pay to a frantic end-to-end opening, only for Felipe Anderson to equalise mid-way through the second-half. The Terriers stood up well to a late Hammers onslaught, although it may well have been the Terriers who snatched it at the death had Laurent Depoitre witnessed a great slice of fortune in added time.

On an afternoon where Christopher Schindler made his 100th Huddersfield Town appearance, David Wagner named an unchanged starting line-up for the visit of a Hammers side - also unchanged from a previous victory over Burnley - that completed the double over the Terriers last season, with the most recent of encounters seeing the East Londoners run amok in the second-half of a 4-1 success in Kirklees back in January.

Monday's victory over Fulham seemed to have an early confidence booster as the Terriers made a flying start - literally.

Aaron Mooy couldn't quite nip in to finish a cultured Alex Pritchard through ball but managed to win a corner from which Steve Mounié leapt highest to thunder a header off the crossbar via a magnificent fingertip diversion from Łukasz Fabiański.

As Town thought they'd hit an early front, the equally confident visitors from the Capital responded almost immediately with two great chances themselves.

The electric Felipe Anderson firstly saw a cut-in right-footed effort blocked away on the slide by Schindler ahead of Marko Arnautović springing the offside trap to only race away and have an effort well saved by Jonas Lössl.

A frantic start of all frantic starts; and it was ultimately the men in blue who capped a truly hectic first 10-minute spell with that all-important opener.

Seconds after Steve Mounié's attempted bicycle-kick was recouped and recycled by Fabiański, the second ball was won by the Terriers centre-field; a platform to build a head of steam when maintaining the pressure on that Hammers rear-guard.

It eventually fell to Alex Pritchard who produced a delightfully placed low effort into the bottom right-hand corner, raising the roof off yet another packed out John Smith's Stadium.

At that point youd've thought that proceedings would eventually begin to settle down, and that the tempo surely couldn't continue at such a rapid rate; how very wrong that statement would be.

Just the buzz amongst the terraces was enough to hand this game a definite air of excitement between two sides who were evidently fired up to come out with a reward to prolong the winning mentality; and for the home support, and David Wagner, they would certainly have been thoroughly impressed with a tremendously energetic opening.

As most regained their breathe from the unbelievable start, Town came within the width of a post from doubling the lead in remarkable style.

Philip Billing, the man to see his admittedly wayward cross cannon back off the inside of the post, and with Fabiański stranded, the attempt somehow stayed out to let the away side relatively off the hook.

West Ham would always pose a threat nonetheless, especially on the counter. That man Anderson surged down his native left, undoing hard work to cover the ground required by not finding an unmarked Arnautović in the six-yard box. Hesitation led to Christopher Schindler perfecting a sliding tackle to dispossess the Brazilian and clear the lines.

As Anderson wasted, Steve Mounié also couldn't make the most of an appealing opportunity at the other end. The Hammers central defensive unit was nowhere to be seen, and a large gap was exploited by the Benin forward having been found by goalscorer Pritchard through a sloppy use of possession from Issa Diop.

Fabiański was more than equal to the resulting shot on this occasion, saving well with strong wrists down to his left; another massive let-off which may well have seen the lead extended ahead of the interval.

Chris Löwe made an unfortunate premature departure with a shoulder injury; the only downside to what had been an excellent first-half display all-round.

The first real chance of the latter half fell to the visitors, and half-time replacement Chicharito.

A Mexican international, the forward squirmed his way through multiple Town challenges before prodding unsuccessfully at Jonas Lössl, who saved the initial effort, and blushes would be spared as Chicharito headed inches over on the rebound despite climbing above the majority of the Town defence in and around the penalty spot.

Themes of missed chances rolled on, this time as Town broke forward with Pritchard. Pritch bore down on Fabiański, latching onto a defence-splitting flick-on from Steve Mounié, only to find himself superbly halted by Diop's recovering tackle as the attacking midfielder pondered whether or not to pull the trigger.

Still, a clear sign that chances would come with the implementation of that recently-lacking incisiveness to turn a high Hammers line inside-out.

With that the men from the London Stadium weren't going to roll over and take the defeat lightly. Pedro Obiang's near-post header flashed across goal and out of play for a goal-kick after the midfielder had made a quick dart ahead of his marker from Robert Snodgrass' wicked corner delivery.

Back down the other end it may well and should have been two for the Terriers. A bouncing ball wasn't dealt with by Diop which allowed Steve Mounié to ghost in around the back, but Steve couldn't make an adequate connection to finish past Fabiański from five-yards.

Tenacious work from the impressive skipper figure of Jonathan Hogg opened up a chance for Alex Pritchard to curl goalwards from the edge of the area; Fabiański once again on his toes to thwart Town, and Pritchard himself, from having a comfortable second.

A second didn't arrive how many would've liked, as Felipe Anderson blasted the away side level.

An almighty scramble wasn't cleared despite a handful of courageous blocks, only until one of the blocked rebounds fell kindly to Anderson who rifled a rocket of a left-footed strike beyond the reach of Lössl into the top corner.

In fairness, chances had been few and far between for both in the second period, but Anderson showed that clinical edge to ensure the Irons drew level with 13 to play.

And now the momentum really was with United. Diop thought he'd headed the away side in-front from another Snodgrass corner, although Aaron Mooy had other ideas to crucially nod away on the line.

Backs against the wall for the Terriers; they rode the pressure well, relieved of it as Antonio fired over, leading to Erik Durm driving forward to fire agonisingly wide of Fabiański's upright; gripping action in HD1.

Just as it looked like both sides would settle for a point, Town would have a final spell of pressure at the death which saw a golden chance go begging.

A delightful cross from Terence Kongolo fizzed across the face of goal, and towards Laurent Depoitre in the centre. The Belgian worked some space to throw himself at the delivery to fire home a winner, but it would inevitably end up just out of the reach of the late substitute to ensure that the spoils would be shared.

With an international break on the horizon, Town return to action in a fortnight's time, where a trip to Molineux to face Wolverhampton Wanderers is on the cards (Sunday 25 November 2018, 4pm). 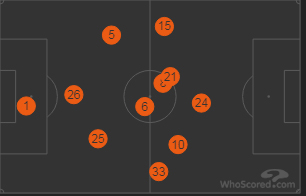