All the information you need ahead of Huddersfield Town vs Southampton

David Wagner’s Huddersfield Town will look to give the fans an early Christmas present with a win over Ralph Hasenhüttl’s Southampton on Saturday 22 December 2018; 3pm kick-off.

Town’s Head Coach will be hoping his side can bounce back following Saturday’s 1-0 home defeat to Newcastle United.

However, the Saints come into the game on the back of a 3-2 home victory over Arsenal, ending the North London side’s 22-match unbeaten run. 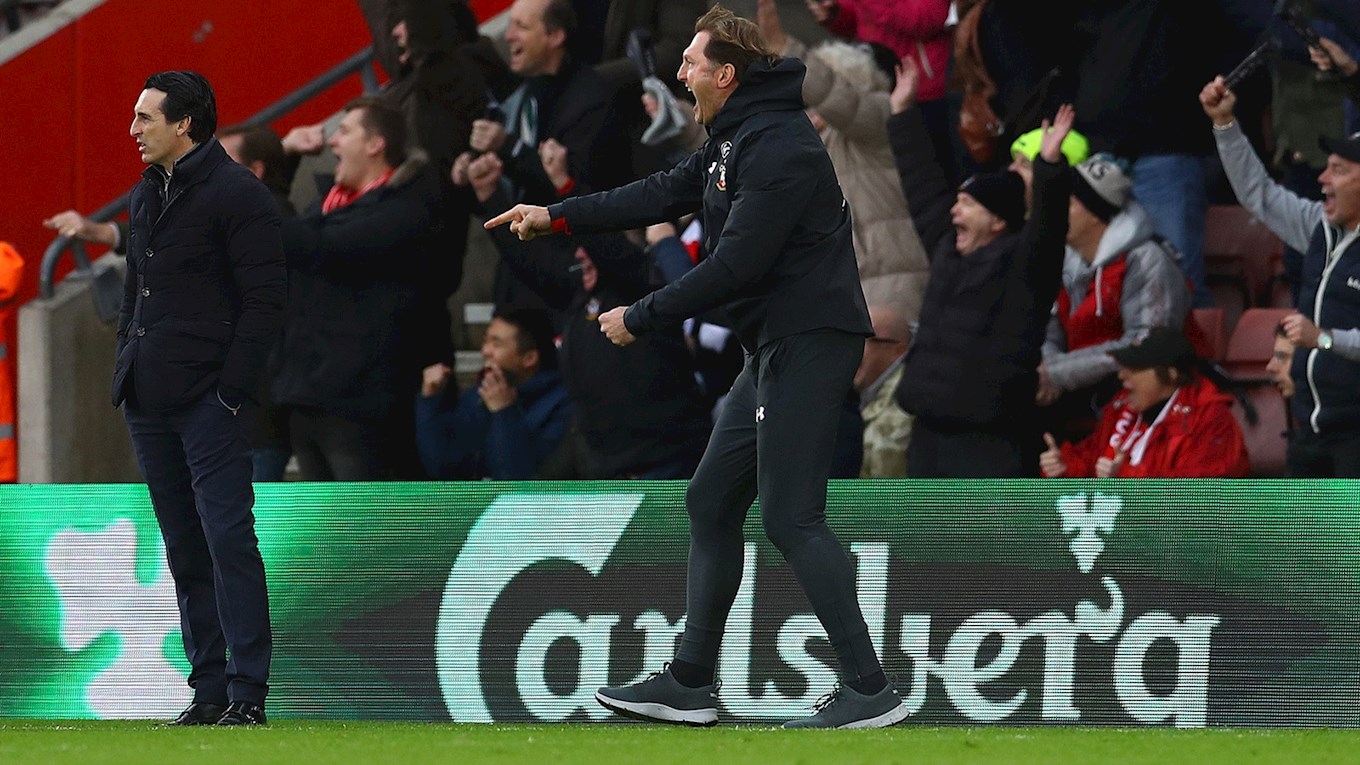 Hasenhüttl (above) was appointed as Manager earlier this month to replace Mark Hughes.

The former RB Leipzig boss has been in charge of Southampton for just the two fixtures, an away defeat to Cardiff and the win over Arsenal.

He is known the a full-throttle, gegenpressing style of play, which he has began to implement with the Saints.

The corresponding fixture in August 2018 saw the points shared as the game remained goalless.

Interestingly, the two sides have only met on 26 occasions, with both clubs winning 11. The first meeting between the pair came on 1 November 1952 as Town won 2-0.

Stuart Armstrong began his career with Dundee United and the attacking midfielder made 150 appearances for the Terrors. Armstrong joined Celtic in 2015 where he scored 28 goals in 144 appearances. The Scotland international signed for Southampton in the summer transfer window and has already grabbed three Premier League goals for the Saints this season. 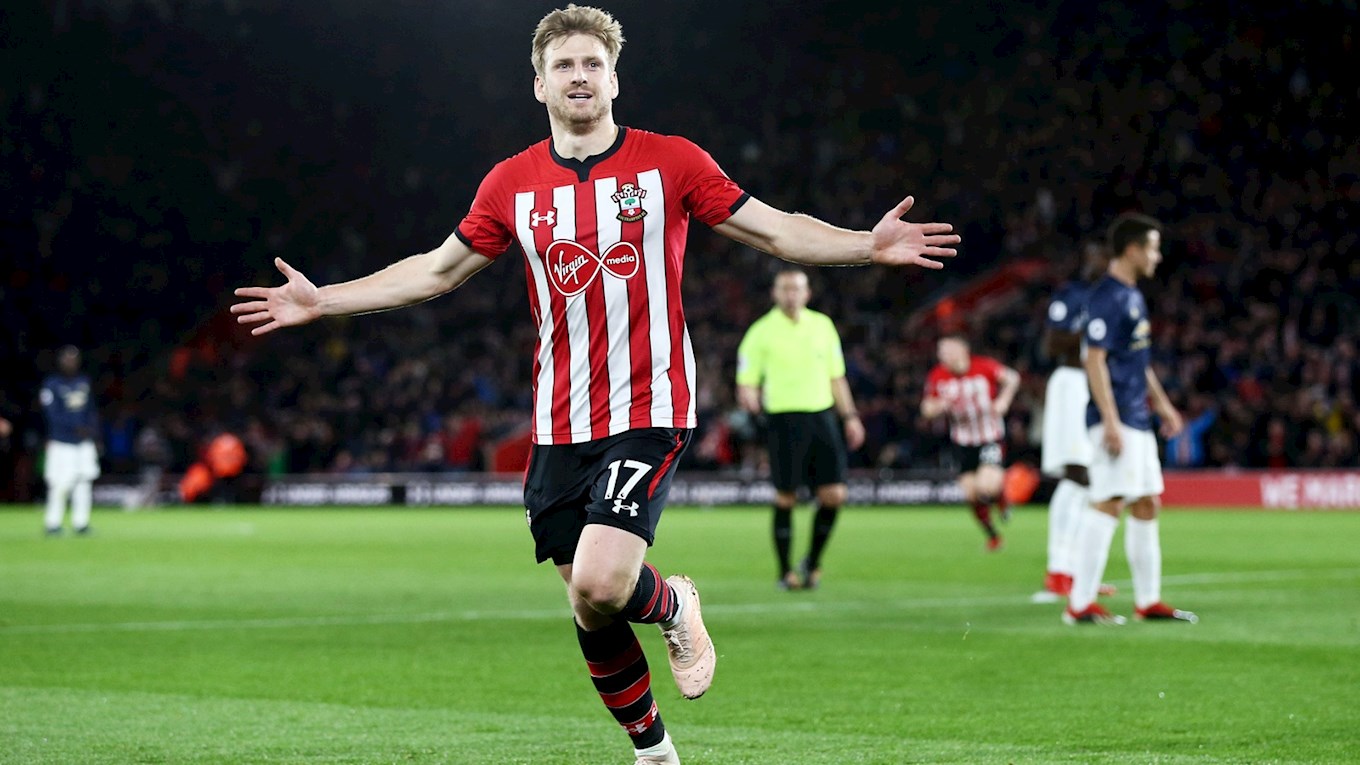 Charlie Austin was playing non-league football only nine years ago before he was signed by Swindon Town in 2009. Austin grabbed 37 goals for the Robins before making the move to Burnley where he found the net another 44 times. A move to QPR followed before the striker joined Southampton in January 2016. The 29-year-old has scored 20 goals in 68 appearances for the Saints, including the winner in the 3-2 win over Arsenal. 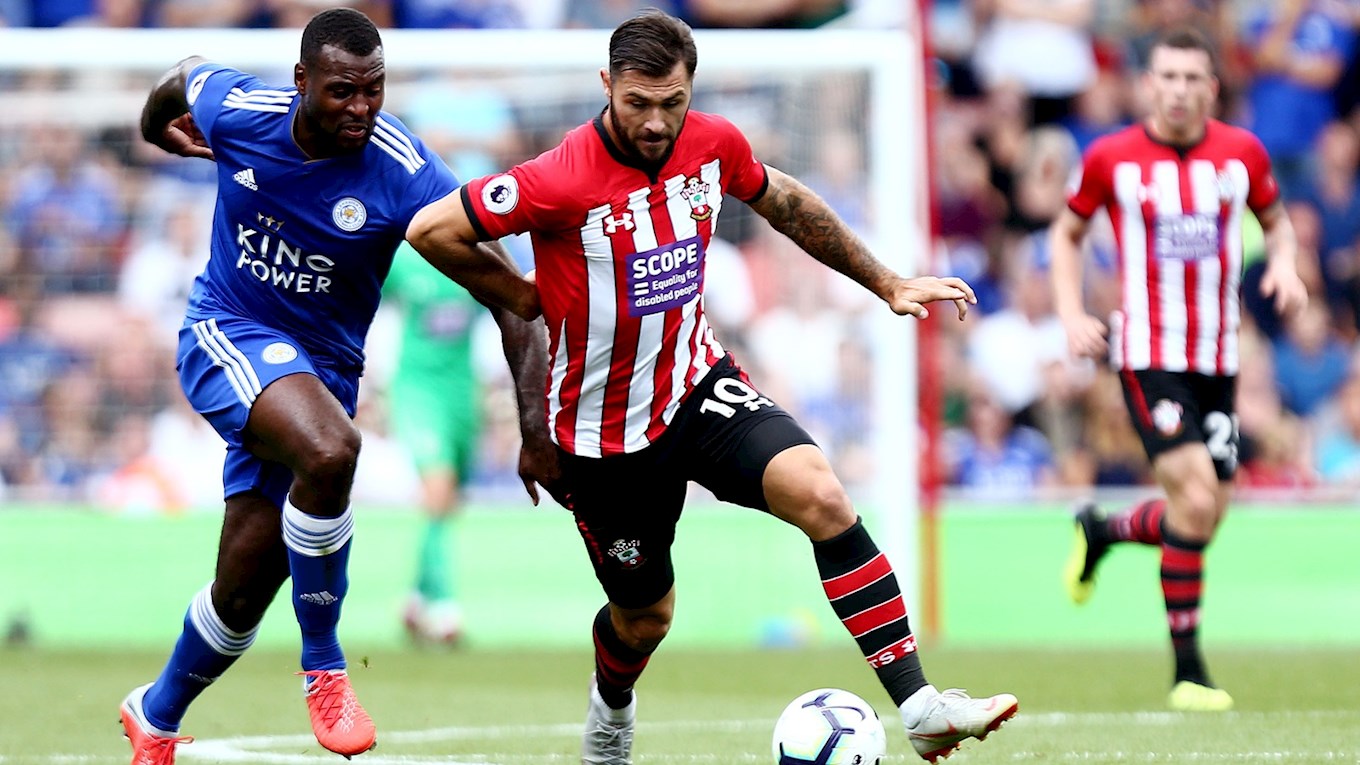 Danny Ings started his career with AFC Bournemouth before signing for Burnley in 2011. The striker scored 43 goals in 130 appearances for the Clarets before joining Liverpool. His time on Merseyside was dominated by injuries and the 26-year-old signed for Southampton in August on an initial loan until the end of the season. The move is set to become permanent on 1 July 2019. Ings has scored six goals this season for Southampton including a double in last weekend’s win over Arsenal. 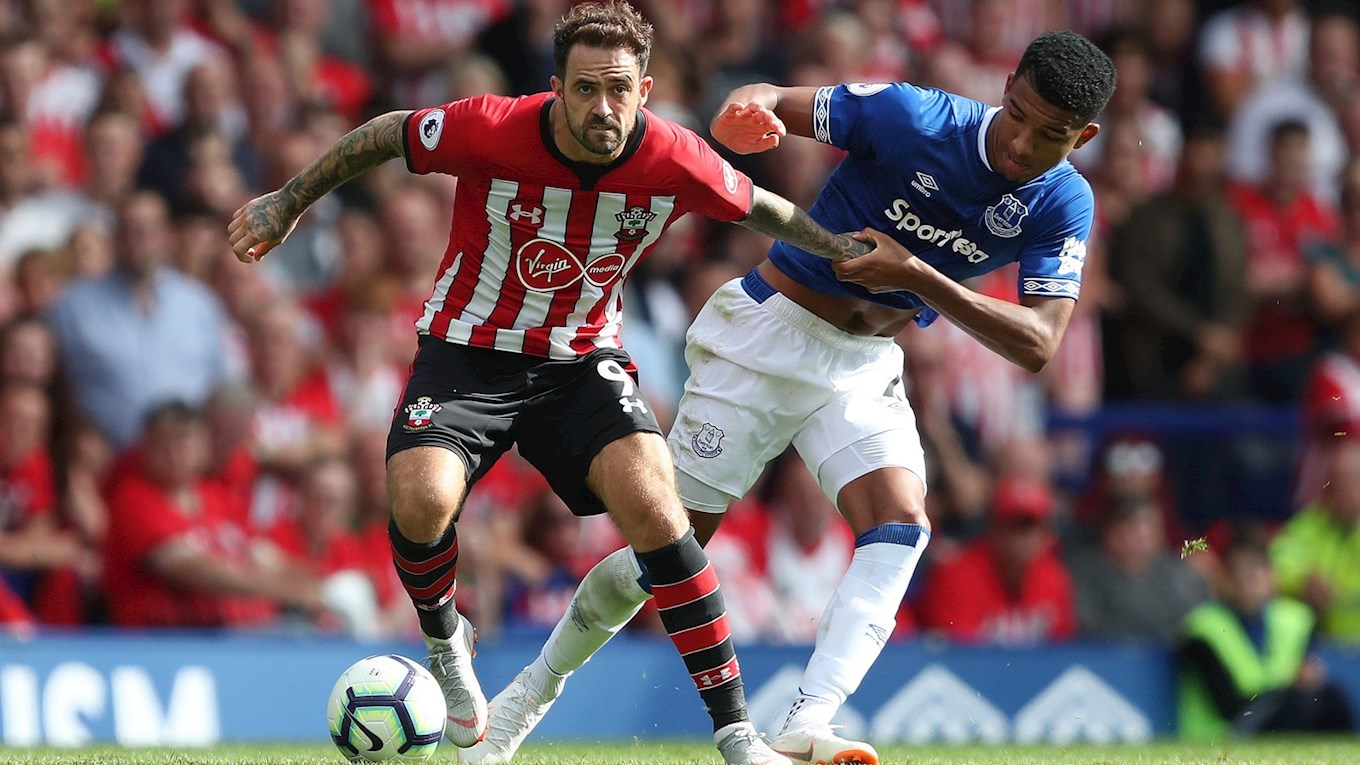 Southampton will more than likely be without full-back Ryan Bertrand who has missed the last five league fixtures with a back injury.

No pre-Christmas cheer in HD1 as visitors Southampton took all three points back to Hampshire.

A duo of first-half strikes from Nathan Redmond and Danny Ings (pen) ensured Town had a mountain to climb come the second 45, and despite a brief rally to pull a goal back through Philip Billing, substitute Michael Obafemi scrambled a third late on to kill off a spirited fightback.

The Head Coach made two changes to his starting squad on a pleasantly mild December afternoon. Steve Mounié and Isaac Mbenza got the nod ahead of Laurent Depoitre - a scorer at St. Mary's on the same festive weekend last season - and Jonathan Hogg - out with a minor knee issue - respectively. The occasion was Belgian Under-21 International Mbenza's first start on home soil for Huddersfield Town.

Ralph Hasenhüttl's Saints arrived in West Yorkshire full on confidence after a 3-2 victory over Arsenal last Sunday, and early on it was evident that the Terriers would have to be alert and switched on to navigate the new Manager’s high intensity pressing philosophy.

With the installation of that man Mbenza to the starting line-up, there was an extra sense of pace and excitement on the break for Wagner's men. Not only did the midfield look content to hound their opponents and utilise possession usefully, but the out ball down the channel for livewire Isaac was always going to cause a threat.

Buoyed by the previous win, Saints found Jonas Lössl resilient in the opening exchanges, firstly to bat away Matt Targett's low cross and then smother Oriol Romeu's piledriver from distance.

There was nothing Lössl could do to stop the South Coast visitors from taking the lead moments later.

A tidy passage of play to work space in the centre saw Pierre-Emile Højbjerg drive with intent before delivering an inch-perfect through ball to the feet of Nathan Redmond.

The winger's run was found to perfection and he duly slammed home the opening goal of the contest; a goal which on the balance you could have said was deserved to say the least.

It was proving to be difficult going, and as the half-hour mark neared the spark had yet to be ignited, and there was little in the way of goalmouth action. That being said, Town was slowly but surely starting to gain a much-needed foothold against a side that were obviously in the mood to secure back-to-back league successes.

Redmond himself took it upon himself in the bid to double the advantage, continuing to curl over from the edge of the area as Romeu had won possession back yet again.

The goalscorer almost turned provider as the interval dawned. Breaking forward after a Billing slip, Redmond looked to pass inside for the clear run of Danny Ings, but Christopher Schindler had other ideas to produce a timely block and clear before the rebound could materialise into a second phase opportunity.

Just as it looked like it would only be the one goal deficit heading into half-time, that soon changed. Ings tucked home from the penalty spot having been fouled by the outstretched leg of Zanka.

Steve Mounié skied a half-decent chance to reduce the arrears, as the men from HD1 were really going to have to come up with Christmas cracker of a second-half performance if they were to get any reward.

Alex McCarthy had had somewhat of a relatively quiet afternoon for Southampton. The stopper was called into action however early in the latter period to thwart Zanka from grabbing that vital goal to get back into the game; a strong right-hand diverted away for a corner - from which nothing would come to fruition - as Town's Danish defender beat marker and compatriot Jannik Vestergaard to the punch.

Another Dane did manage to claw the Terriers back in with a shout. A blistering left-footed drive from range whistled into the net beyond McCarthy. Game well and truly on, and the crowd firmly buzzing with excitement and anticipation.

Blue and White tails were up. McCarthy had to be sharp to keep out Isaac Mbenza's low drive from an angle, ahead of bravely diving on Steve Mounié's knockdown as a determined cavalry of Terriers swooped to prod home what would've been a remarkably quick equaliser.

Things had really come to life as Town were giving it a real go. With a spring in their steps, neat exchanges fell to Alex Pritchard who delivered a whipped effort from 18 yards. McCarthy positioned himself well to man the Southampton barracks for the time being at least.

For all the attacking play, there still had to be a degree of caution on the defensive end; and all the hard work would come undone.

Having let Town off by missing the first chance wide of the post, substitute Michael Obafemi rolled in a third to kill the momentum. The striker feigned an initial strike to induce an attempted sliding block from Zanka, and eventually found the corner as a result of good work from Nathan Redmond to win the ball back on the by-line as the Terriers failed to clear their lines.

Obafemi had already netted his first Premier League goal and came within a whisker of a second. He raced away from Erik Durm on half-way to bear down one-on-one with Jonas Lössl, who in turn produced a smart stop to deny the away side from making it 4-1.

Not the planned chain of events for David Wagner and his men ahead of Christmas, and attentions now switch to an Old Trafford trip on Boxing Day (26 December 2018, 3pm).