Huddersfield Town will return to the John Smith’s Stadium to host Leicester City in the Premier League on Saturday 6 April 2019. Brendan Rodgers’ Leicester will make the trip to West Yorkshire, to face Jan Siewert’s Terriers, for a 3pm kick-off.

Town’s Head Coach will be hoping that his side can kick on from being officially relegated from the Premier League at the weekend, with a positive result against Leicester City.

The latest of those victories was a 2-0 win against AFC Bournemouth at the King Power Stadium, last Saturday. 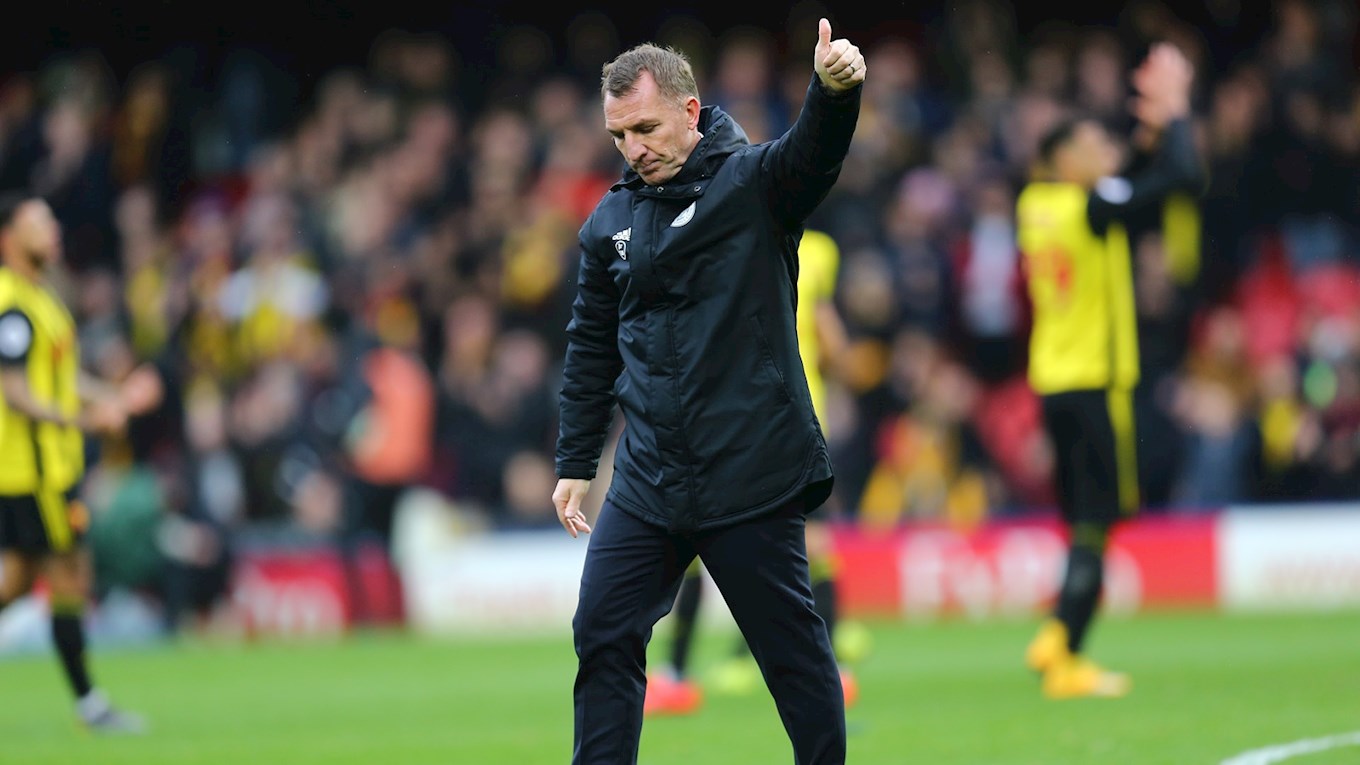 It means that Rodgers (above) has now won three of his first four games in charge of the East Midlands’ outfit, with the only defeat coming in his opening game away to Watford.

The reverse fixture earlier this season saw Town on the receiving end of a 3-1 scoreline, despite Zanka’s early opener giving the Terriers the lead. Town’s last win at home against the Foxes came in 1995.

The Foxes’ top scorer has netted 13 of his total 75 Premier League goals in the 2018/19 campaign, with his latest coming in Leicester’s most recent win against AFC Bournemouth. Having brought up the 100-goal mark for Leicester in recent weeks, the striker is in-form and has benefited from the arrival of new manager Brendan Rodgers. Vardy has scored at a rate of a goal-a-game across Rodgers’ four match reign at the King Power. 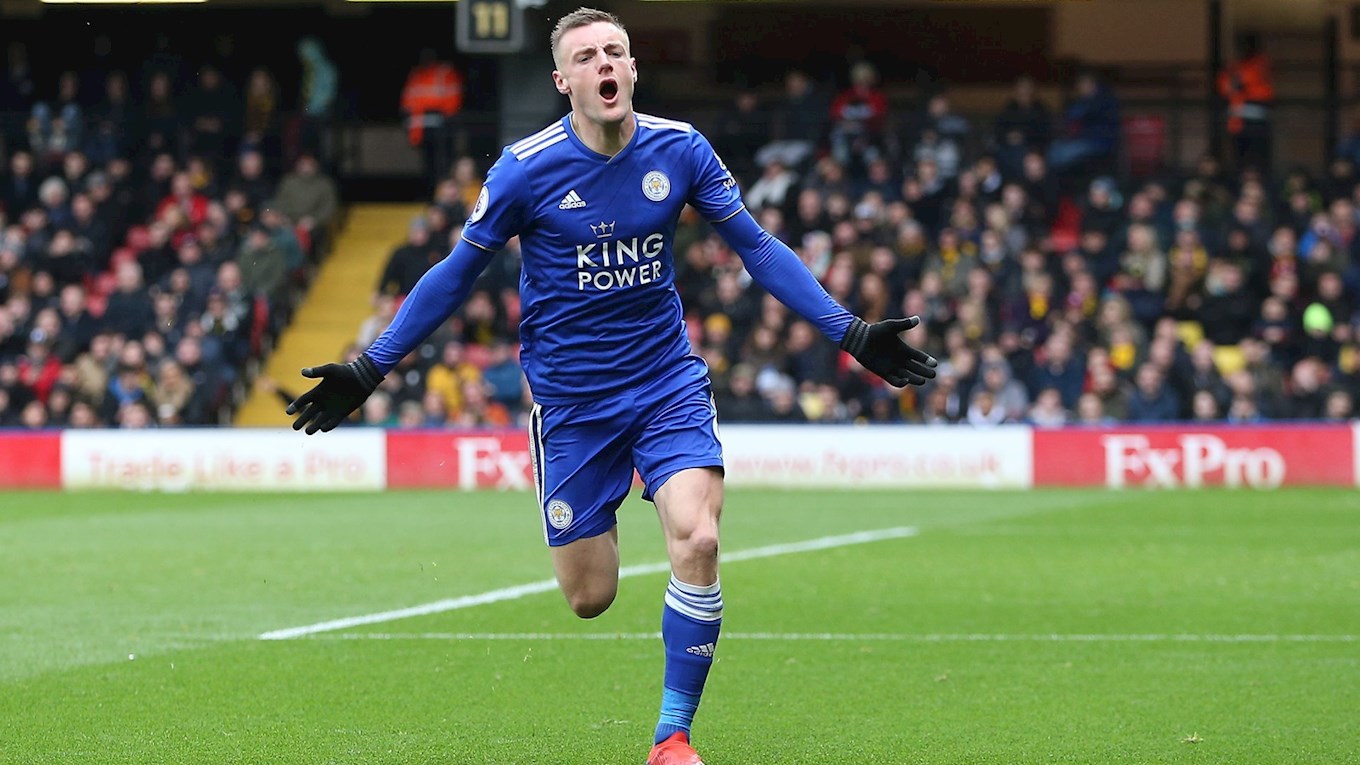 Another player that has starred for the Foxes under Rodgers is Club Captain Wes Morgan. The defender has featured in three of Rodgers’ first four games. Morgan has found the net in the Foxes’ last two outings and has been a key figure and leader at the back. He helped Leicester City keep its first clean sheet since New Year’s Day last weekend. 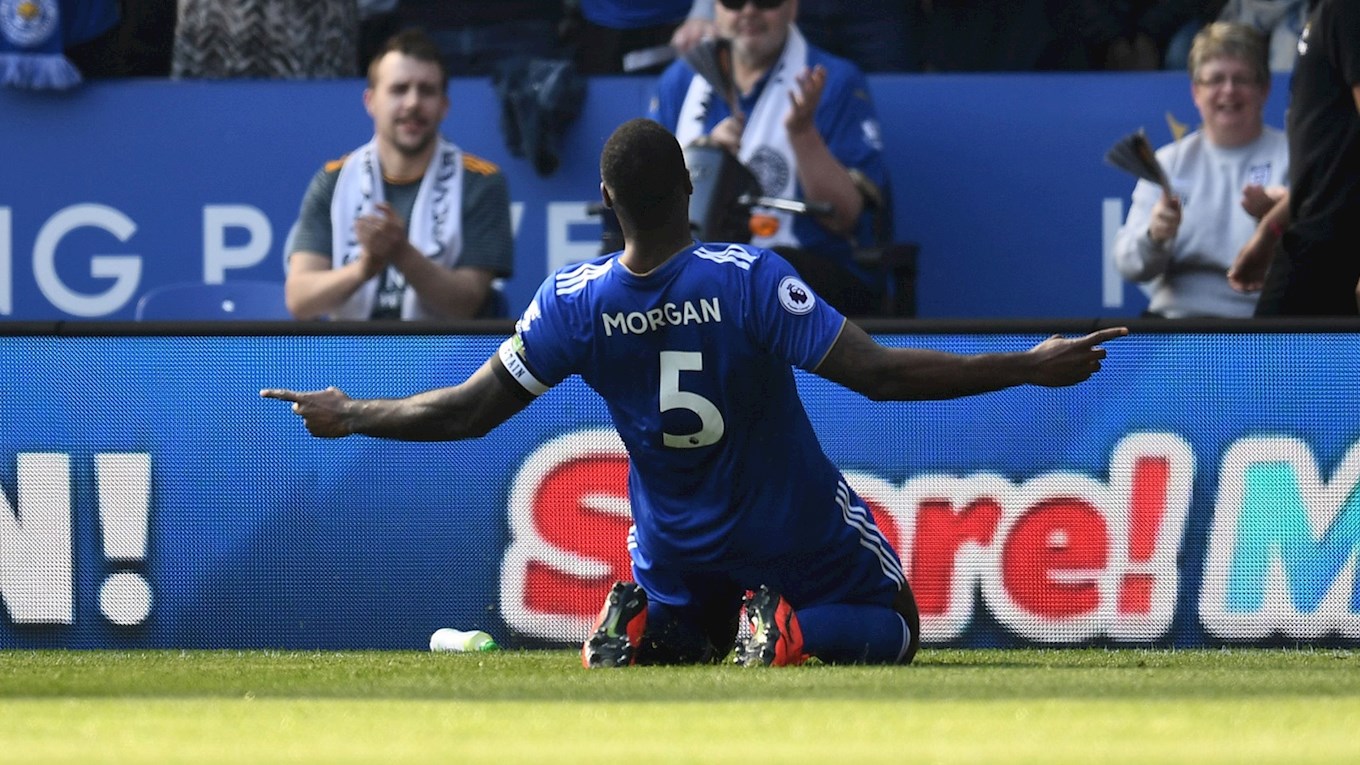 Tielemans joined the East Midlands club on loan in the January transfer window and has had an immediate impact in Leicester’s midfield. The 21-year-old has contributed to a goal in each of his last five appearances (one goal, four assists) for the Foxes and also started twice for Belgium in the recent international break, scoring in the 3-1 win against Russia. 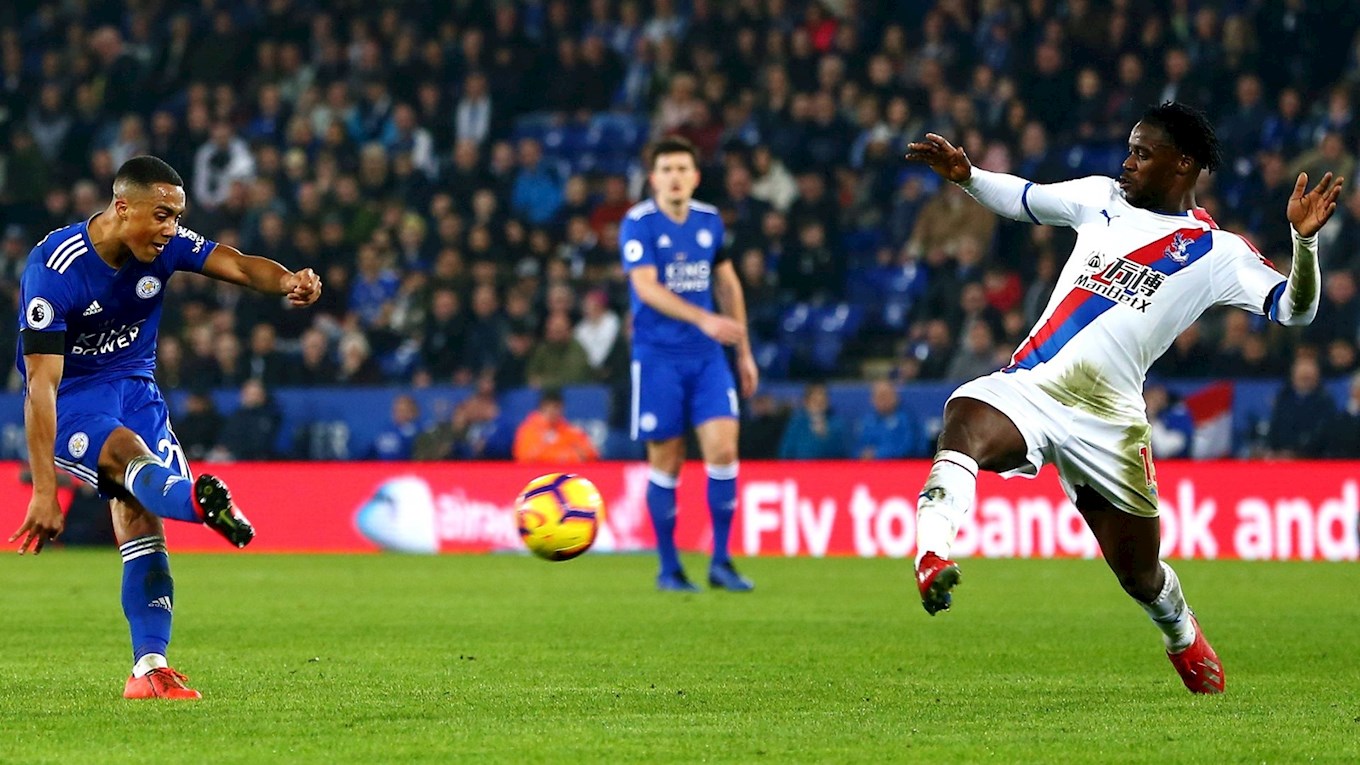 Brendan Rodgers will be without Daniel Amartey and Marc Albrighton who will not feature in Saturday’s game due to injury.

Town will be wearing the famous blue and white stripes for Saturday’s game against Leicester City. CLICK HERE to buy yours now!

Relegation may already be a certainty, but it was another disappointing afternoon at the John Smith's Stadium as Leicester City recorded a league double over the Terriers with a 4-1 victory.

Leicester had the better of the first half, despite only managing to find the net once on the back of a sustained period of pressure through Youri Tielemans. Jamie Vardy scored the first of his brace minutes after the restart, and although Aaron Mooy converted Town's first penalty of the season to make it a contest, the visitors sealed all three points in the shape of James Maddison's precise free-kick and the second of Vardy's strikes, also from the spot, as full-time neared.

Jon Gorenc Stanković replaced Juninho Bacuna in the only Town change on a pleasantly sunny early April afternoon in HD1. Isaac Mbenza and Steve Mounié also returned to take up spots amongst the substitutes, whereas the visiting Foxes contained a number of ex-Terriers in the form of play-off goalkeeping hero Danny Ward and recent England international Ben Chilwell.

Despite an entertaining opening to the clash, it was Leicester who had the initial chance in a bid to bring about their fourth win a row.

Young winger Harvey Barnes' delicate lift across the face of goal beckoned to be nodded home by Jamie Vardy, only for the latter to fail to adequately connect and Demarai Gray also couldn't finish having snuck round the far side.

Brendan Rodgers' side continued to have the clearer sightings of the net. It took a good Ben Hamer reflex save to thwart James Maddison from tucking home a rebound instigated from another Barnes cross, this time low and driven to the near post.

Pressure finally told, as Youri Tielemans fired City ahead from the edge of the area. The Belgian rifled home a right-footed strike past Ben Hamer to give the East Midlanders a lead which you could probably have said was fully deserved.

Moments later, Demarai Gray blazed high and wide to let Town off the hook after a passage of play which saw the ball end up at the winger's feet in light of Jamie Vardy taking a tumble. Referee David Coote waved away muted claims for a penalty, however.

Half-hour mark up, and Town came within a whisker of levelling. Çağlar Söyüncü was the Foxes' hero, recovering to clear Alex Pritchard's instinctive chip from distance off the line to spare the blushes of 'keeper Kasper Schmeichel who'd somehow ended up out of position.

But that was as near as the Terriers came within the first period, and instead should've gone in at half-time trailing by two.

Gray excelled through a gap with sensational pace to slice the Town rearguard open, and with multiple team-mates in advanced positions during a four-on-one scenario, he elected to shoot; to the dismay of his fellow Foxes. Ben Hamer rushed out to divert away a chance that may well have taken the contest out of sight and sent the points back to Leicestershire.

Although there was nothing relatively to play for after relegation was confirmed last week, there was a positive change at the interval which would've perked the spirits of the home faithful. Isaac Mbenza entered the field to make a first appearance in eight Premier League fixtures, and made an immediate impact.

From the right flank, Isaac delivered a peach of a cross to which the arriving Karlan Grant met on the slide. Grant made a powerful connection but lacked accuracy, firing straight at Kasper Schmeichel who made a decent stop from point-blank range.

But as a chance went begging at that end, back up the other Jamie Vardy clinically doubled the Leicester advantage. Another cross from the right caused havoc, this time instigated by Portuguese full-back Ricardo Pereira. Vardy popped up in the correct place at the back stick to sweep home the second.

The two-goal cushion would only last a matter of minutes, however. Town's first penalty of the season, given by referee Coote for a trip on Karlan Grant, was coolly slotted down the middle by Aaron Mooy to reduce the arrears in the blink of an eye; game well and truly on once again.

Leicester's creativity always ensured that the men from the King Power Stadium looked dangerous more or less every time they ventured forward, and the efforts of James Maddison to restore the two-goal buffer whistled agonisingly wide of the post after a neat reverse from Harvey Barnes through a number of blue and white shirts inside the box.

For all their attacking presence was, Leicester really had Schmeichel to thank for keeping the Terriers at bay. Not only did the Dane produce a smart save to deny Grant earlier in the half, he followed up to expertly dive to his right to ensure replacement Steve Mounié's forceful shot on the swivel didn't nestle in the far corner.

Those saves would prove vital, with James Maddison sealing the victory 10 minutes from time. A lovely, clean strike into the right-hand bottom corner sailed past a helpless Ben Hamer to all but ensure the away side would indeed stretch that winning run to four.

To rub salt into the wounds, Jamie Vardy added a fourth late on. Having been fouled in the area whilst rounding a stricken Hamer, the forward sprung to his feet and converted the resulting second penalty of the day, albeit despite Town's 'keeper managing to get a hand on it.

Not an afternoon that Siewert will look back on with the best positivity, and the run-in doesn't let up, with a trip to the newly opened Tottenham Hotspur Stadium on the horizon in-front of the Sky Sports cameras next Saturday lunchtime (13 April 2019, 12.30pm).