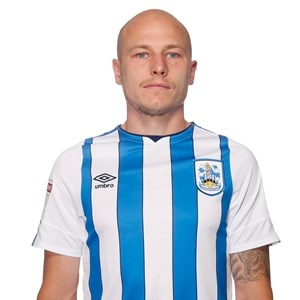 Out On Loan
Brighton & HA

The 26 year-old, who joined the Premier League club from Australian A-League side Melbourne City a week ahead of his Town move, was born in Sydney and stands at 5’ 11” tall.

An attack-minded central midfield player, he had scored five goals in 16 caps for the Australian national side ahead of his move and arrived having set a new A-League record of 20 assists in the 2015/16 campaign.

Mooy, who also holds a Dutch passport through his mother’s heritage, will wear the number 10 shirt during his time at Huddersfield Town.

Aaron started his career in New South Wales, but moved to England in 2006 to join the Bolton Wanderers Academy. As a Bolton player he featured in the Under-20 World Cup for Australia in 2009 before rejecting a new contract with the Trotters a year later in favour of regular First Team football.

Mooy subsequently joined Scottish Premiership club St. Mirren that October and went on to score twice in 29 appearances before leaving in the summer of 2012.

At that point, Aaron moved back to his native Australia to join new A-League side Western Sydney Wanderers. He helped his new side win the league in the Club’s debut campaign, with Sydney reaching the Championship Grand Final in both of Aaron’s seasons.

It was as a Sydney player that Aaron made his full Australia debut in December 2012, scoring during his first cap; a free-kick against Guam.

Having scored five times in 54 appearances for Western Sydney Wanderers, Aaron moved to rivals Melbourne City in May 2014 and went on to produce his best football at club level.

He was named the Club’s ‘Player of the Year’ and finished top scorer in his first season, combined with eight assists.

Things got even better last season, when he recorded a league record 20 assists and maintained the Club’s ‘Player of the Year’ title.

In total he netted an impressive 24 goals in 58 appearances for Melbourne before joining Manchester City in the summer, taking his career total to 31 goals in 141 domestic appearances.

To purchase a shirt with Mooy on the back please CLICK HERE!

WATCH: Aaron Mooy spoke to the media ahead of Watford

WATCH: Aaron Mooy spoke to the media ahead of Town’s match against Newcastle United

TERRIERS FEATURE ALL OVER THE WORLD