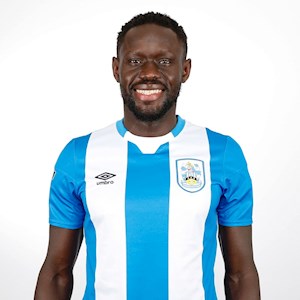 Huddersfield Town completed the signing of Senegal international striker Oumar Niasse in March 2021 on a contract running until the end of the season.

Oumar was born in Ouakam, Senegal. He was a relative latecomer to elite football, but eventually caught the attention of several admirers through his goalscoring form at his local side, US Ouakam, who he helped take from the Senegalese second tier to a Premier League title win.

Often playing as a winger as well as up front, he earned his first international cap for his nation whilst playing in the Senegalese division. He currently has three goals in nine international appearances.

His first venture into Europe was a short loan spell with Norwegian top-flight club Brann, where he made four appearances, but he eventually made a permanent move to Turkey in August 2013, signing for top-flight team Akhisar Belediyespor.

Niasse spent just one season in Turkey, but it was a very successful one – netting 15 goals in 38 starts and two substitute appearances.

That form alerted Lokomotiv Moscow to his ability, and he soon completed a summer move to Russia for a reported €5.5 million.

Oumar’s game time was restricted in his debut season, although he still netted six goals in just 11 starts and eight substitute appearances. One of those goals came late in the season on the biggest stage; an important goal to set his side towards victory in the Russian Cup Final.

That gave him a real platform and 13 goals in just 23 games to start the following season soon saw him named the 2015 Russian Premier League Player of the Year.

Such goal-scoring form piqued the interest of clubs in Europe and he moved to England in February 2016, signing for Everton for £13.5 million, putting pen-to-paper on a contract running until the summer of 2020.

Oumar made seven appearances to finish that season but was then not named in Everton’s 25-man squad for the 2016/17 Premier League season. Accordingly, he played just one EFL Trophy game by the end of the calendar year.

A loan move to fellow Premier League side Hull City for the second half of the season showcased what he was capable of, with five goals in just 13 starts and six substitute appearances.

That propelled him back into the reckoning at Everton at the start of 2017/18, and he netted nine goals in just 10 starts and 15 substitute appearances for the Toffees.

After just one start and six substitute appearances at the start of the 2018/19 campaign, Niasse made another cross-league loan move to Cardiff City in January 2019, where he furthered his Premier League experience with another 12 starts and a further substitute appearance.

He was on the fringes at Goodison Park last season, making three Premier League appearances and scoring twice in as many EFL Trophy starts.