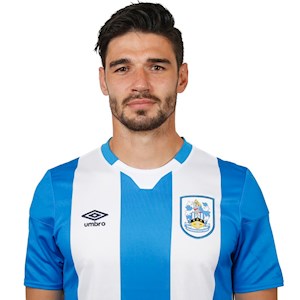 Huddersfield Town completed the signing of TSV 1860 Munich captain Christopher Schindler for what was then an club record fee in late June 2016.

The seven figure fee the Club paid for the 26 year-old eclipsed the amount paid for reigning Player of the Year Nahki Wells, who arrived from Bradford City in January 2014.

A 6’ 2” tall centre back, Schindler had played exclusively for his hometown club since making his professional debut nearly seven years ago, captaining the side for the last two years. He arrived with over 200 career appearances under his belt, the majority of which have come in the 2. Liga.

He put pen to paper on a three year contract, with the Club having the option to extend it for a further season.

After playing for the Under-19 team for three seasons, Christopher – who earned four caps for Germany at Under-21 level – made his professional debut in the Regionalliga Sud for 1860 Munich II in late 2009.

His 2. Bundesliga debut for the Lions’ First Team soon followed in October 2010 in a 1-0 derby win over Union Berlin; he finished his debut campaign having made five starts and 11 substitute appearances.

Christopher became a First Team regular in the 2011/12 campaign, also lining up at right back and in holding midfield on occasion before cementing a centre back berth. He made 30 appearances that season as the side finished sixth in the 2. Liga.

Schindler took over as Club Captain in 2014 and has been a virtual ever-present since.

He earned his place in club folkelore by netting the winning penalty in the 2017 Play-Off Final shootout that earned Town a place in the Premier League for the next two seasons.

Christopher was voted Huddersfield Town Player of the Year by supporters in 2018 and 2019, becoming the first back-to-back winner of the award since Peter Clarke in 2011.

To purchase a Town shirt with Schindler on the back please CLICK HERE!

DANNY COWLEY ON A HARD-FOUGHT POINT